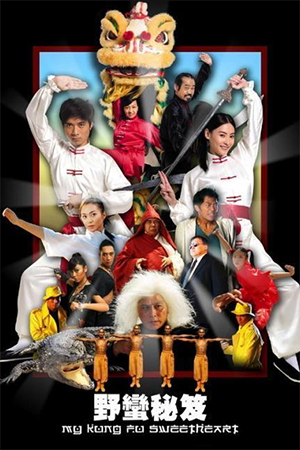 One’s enjoyment of ‘My Kung Fu Sweetheart’ (MKFS) depends on one’s appreciation, or tolerance, for Wong Jing’s films. This recent effort is packed full of his usual in-joke movie references, chaotic comedy, sub par martial arts and bevies of beauties. ‘MKFS’ is the usual rushed, frothy concoction from Jing but mercifully nowhere near as crude (in the comedy department at least) as some of his other efforts. And any film that features the beautiful Cecilia Cheung in a lead role and a bloke dressed as a giant Hawk for most of the run time, must be worth a look? Well almost.

Phoenix (Cheung) is an ordinary woman just trying to live an ordinary life. Sent to a remote training temple when she was a youngster, Phoenix grows up to be a proficient Kung Fu Master just like her parents. Given a premonition that the love of her life will be a man who can see her unique abilities when she is invisible to everyone else, Phoenix stumbles upon said man in the form of Dragon (Leo Koo). Its love at first sight but the road to love is burdened with obstacles, not least by Phoenix’s now divorced parents (Yuen Wah and Yuen Qiu). On top of that a legendary Kung fu warlord, White Eyebrows (Ma Shuchao) has resurfaced and is causing havoc in the city. Inevitably his path crosses with Phoenix, as does a love rival from her old kung fu school in the guise of a former classmate. On top of all that, Phoenix learns her dad is nothing more than a lowly toilet attendant at the local zoo. She is also randomly given a man-size pet Hawk which she must keep with her at all times and at some point must get round to actually kicking some bad guy butt. Hi-jinks, shoddy CGI and a bonkers cameo from Wong Jing himself, ensue.

This would be all good and well, if it was pulled off with even an ounce of skill. With plot points and developments seen a million times before and all cobbled together without much thought for coherency or entertainment value, ‘MKFS’ is a rushed mess and another quickie cash in for Jing. Though a few smiles are raised (the bit where Jing wrestles some crocodiles, Dragon’s hopeless best mate) the film’s comedy is so leaden it will elicit more cringes and winces than guffaws and belly laughs. The cast do try their best but are given little to work with, and putting a man in a Hawk suit and have him prance around does not constitute as comedy. The action doesn’t fair much better, the scenes so overly edited and rushed they barely rustle up any excitement. Almost every actor is doubled badly, even the great Yuen Wah. In fact, his doubling is so bad it’s almost embarrassing. I know he’s getting on a bit now but recent films like ‘Dragon Tiger Gate’ show he can still cut it with the young ones. The CGI, though used sparingly, is not up to scratch and just plain awful in parts.

So, are there any bright spots in ‘MKFS’? Well, as always the lovely Cecilia Cheung is a pleasure to watch and shows she has acting skills that are way above this fluff. There are also a couple of good visual gags, including the scene where Wah and Jing kick a bit and paper back and forth which gets bigger and bigger the more they kick it. Yet, this isn’t enough to sustain 90 minutes, meaning what could have been a rollicking kung fu comedy is just a tedious, forced mess. Wong Jing fans will no doubt get a kick out of it (he has made a few good films) and Cecilia Cheung completists will no doubt want to check it out. For recent quality Hong Kong action comedy, check out ‘House of Fury’ and ‘Rob-B-Hood’ instead.