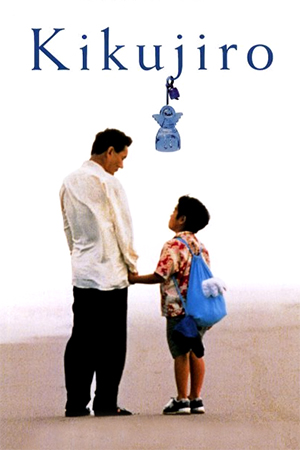 Takeshi Kitano remains one of the most critically appreciated directors to have hailed from Japan in recent years. Although having been a fixture in all aspects of Japan’s entertainment industry, it is his films that have created waves throughout the global cinematic community. Combining the delicate minimalism of some of his country’s best loved directors with a sometimes savage edge and a surreal humour uniquely his own, Kitano has concocted an unusual style that has been imitated by many. ‘Kikujiro’ was to be a departure from his usual examinations of crime and proved to be a major success at film festivals around the world.

Masao is a young Japanese boy who lives in relative happiness with his doting grandmother. With the summer break arriving and his school friends leaving on holiday, Masao finds himself alone during his holidays and in need of companionship. Masao’s father has died and his mother is working in a distant Japanese town so that she can provide money for her young son. Not having seen her for such a long time, the young boy decides to pack up his precious belongings and make the arduous journey to see his mother. A married couple, friends of his grandmother, happen upon his plight though and the waster of a husband Kikujiro (Kitano) is told to accompany Masao on the odyssey. Kikujiro proves himself an incapable carer when he wastes the money for the trip on his gambling addiction and offers little comfort for his innocent charge. After a chain of misadventures on the way, a peculiar bond is formed and the usually repellent Kikujiro is offered a glimmer of redemption. Indeed he sees much in Masao’s torment that reminds him of his own childhood and the mission therefore becomes a chance for both parties to find answers. On arriving at the home of Masao’s mother, the expected reunion takes an unexpected turn and Kikujiro needs to draw on his own humanity to solve a thorny dilemma.

The vicious side of Kitano’s other work is thankfully moved aside in this sensitive and often hilarious portrait of families. Even so, the director isn’t afraid to touch on some darker issues and weaves a multitude of tones and themes into the narrative. Lesser film-makers could barely cope with the main storyline of Kikujiro never mind the deeper subtexts used here. Kitano again draws on his skillful use of cut-scenes and moments of absolute tranquillity to develop an emotion; one frame contains more resonance than any screenplay could ever come close to, imitating the finest artists. Unlike many Hollywood takes on a similar subject, ‘Kikujiro’ prides itself on its unpredictability and genuine heart. Yet again, credit must go to Takeshi Kitano for drawing on characters who breath such energy into the film. Kikujiro himself is not the most pleasant of men, but reveals some hidden sides to his personality throughout the course as do many of the players that appear along the way. This often makes for spellbinding moments of comedy and tension.

‘Kikujiro’ benefits greatly from its two sublime leads. Kitano plays a very similar role to his usual deadbeats, but infuses Kikujiro with a lot more warmth. Yusuke Sekiguchi as Masao is a revelation in the role; without using this as too much of an attack on Hollywood (I do actually watch U.S. films as well!), it’s impossible to imagine such a fragile performance from one of their starlets. The locations also stand as a ‘character’ in this creation, the deserted and lonely areas of Japan used acting as a perfect metaphor for Masao. Simply put, this is a triumph that is essential viewing. 4 stars, but likely to go up to 5 after repeated viewings.