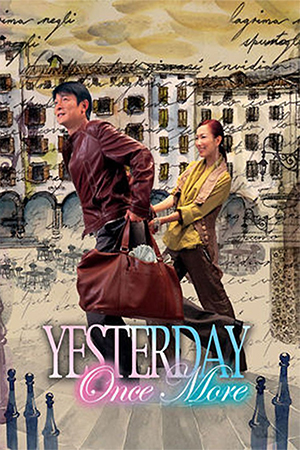 After 18 months that have seen Johnnie To reach a creative apex, it was always inevitable that there would be a flawed production which would bring him back down to earth. With ‘Turn Left, Turn Right’, ‘Running On Karma’ and ‘Breaking News’ under his belt, it would’ve been unfair to his contemporaries if he’d managed to produce another great work. That ‘Yesterday Once More’ is so short of the said classics speaks volumes about how accomplished To is at his best, but it also acts as a reminder of the fact that even outstanding film-makers can make mistakes.

Mr and Mrs To (Lau and Cheng) are two of the most fiendish thieves in Hong Kong having plundered valuable jewels from wealthy families and priceless wines from collectors. After a dispute arises as to how the fruits of the latest theft should be split, Mr To announces that he wants a divorce and promptly disappears. Shocked and upset, Mrs To decides to start a new life and gets engaged to a wealthy socialite who promises her anything if she marries him. She agrees as long as his mother’s priceless necklace is given to her, a request that the loving fiancé agrees to. Mr To, however, is observing the outcome of this faux romance and decides to steal the necklace himself. What follows is a game of cat-and-mouse between the former lovers.

With Johnnie To in the director’s chair and Hong Kong megastars Andy Lau and Sammi Cheng starring as the leading couple, it would be natural to assume that the audience was in for another romantic comedy. ‘Needing You’ and ‘Love On A Diet’ had both been big hits with the critics and the public alike, so tapping into this lucrative sub-genre seemed like an obvious move. Despite the barrage of criticism Johnnie To and his team should receive for this dreary film, at least they did try something different instead of playing it safe. Having made ‘Throwdown’ as an homage to Kurosawa, it almost appears that ‘Yesterday Once More’ is intended to mimic the charm and style of certain Hitchcock films – any romance is kept strictly for the closing thirty minutes of the production. This may or may not be a tribute therefore, but the one very clear thing is that this is vapid film-making.

The major flaw apparent almost immediately is the characterisation. To make a big-budgeted, commercial venture like this with characters as obnoxious as they are is cinematic hara kiri. Sammi Cheng plays a thoroughly unpleasant, shallow, gold-digging ‘heroine’ who has the charm of a leperous baboon while Lau fares only marginally better. Cheng still seems to be riding the popularist wave of charisma that she created in ‘Needing You’ and ‘Love On A Diet’ and trying to use this allure to make Mrs To appealing. Such an attempt fails miserably; Mrs To is irritating and as classy as a ‘Happy Shopper’ carrier bag. Sammi Cheng needs to develop her acting skills beyond the inane whining on offer her and many of her other recent hits.

As with the equally flavourless ‘Marry A Rich Man’, ‘Yesterday Once More’ has a brief sojourn in Italy (in this case Udine) to briefly stir the viewer. Seeing Hong Kong actors in exotic European environments always adds a moment of interest, even if it is transitory. Even when the action is in Hong Kong, Johnnie To knows how to make the locations look fresh and inviting. Cinematographer Cheng Siu Keung utilises different lighting techniques and shooting styles to make a very familiar locale look captivating. It is even more unfortunate that the rest of the film is so bland.

The lead characters are completely uninvolving and most of the actors make no attempt to fight against the lacklustre writing. Johnnie To then fills the background with ‘quirky’ eccentrics who are meant to act as his calling card – that would be fine if this was as entertaining as ‘Running Out Of Time’, but it quite blatantly isn’t. From a constantly sniffing doctor to the bizarre and stomach-tuning sight of seeing nearly every actress smoking a Cuban cigar, this is To clutching at straws. As if Mr and Mrs To (especially the latter!) were not off-putting enough, these subsidiary characters then annoy in sufficient enough measure to encourage the viewer to switch off.

‘Yesterday Once More’ is a major error in Johnnie To’s hitherto accomplished career. He’s made weak efforts before, but few have squandered such resources in such a mind-numbing way. While To deserves recriminations for ‘Yesterday Once More’, there’s little doubt in my mind that one of Hong Kong’s most important film-makers will return to form soon.