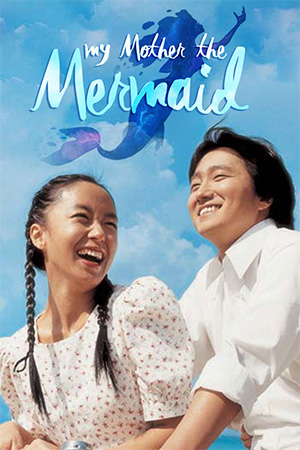 Jeon Do-Yeon impresses with a dual role in this excellent meditation of family and the events that shape it that falls just short of true greatness. Borrowing a conceit from ‘Back To The Future’ to further its narrative, ‘My Mother, The Mermaid’ is that strange blend of the fantastical and the heartfelt that has a power to affect long after the credits roll.

Na-young (Jeon Do-Yeon) is the harassed employee of a Seoul post office who dreams of a future trip to New Zealand as the perfect way to extricate herself from her meddlesome mother. Belligerent, belittling her husband constantly and keen to point out her daughter’s failings, the frequently spitting and swearing Yeon-son has not grown old gracefully. She crushes the earnest attentions of Na-young’s fiancée when she discovers that his job will never make him rich and eventually forces her brow-beaten husband to disappear after he is made to feel worthless.

When Na-young sacrifices her business trip to search for her father, she is surprised to be pointed in the direction of her parents’ birthplace – a secluded Korean island that seems to be stuck in a time warp. That latter statement proves to be literally true when she wakes up in the home of a twenty year-old Yeon-son (Jeon Do-Yeon again) and finds this version of her mother to be considerably more pleasant. This Yeon-son works as a fisherwoman to look after her younger brother and has a delightfully doe-eyed obsession with the village postman, Jin-kook – her future husband.

‘My Mother, The Mermaid’ is one of those films that, while not blessed with the most inviting title, rewards the curious. Starting with a typical mother/daughter dynamic, the story is immediately arresting thanks to the characters; the older Yeon-son is that oxymoron that great films utilise, a repugnant antagonist who is nevertheless completely engrossing. Ko Du-Shim plays the earthy mater with real gusto and creates a domineering figure that the viewer cannot take their eyes off. Just as a very enjoyable family drama begins to gather pace, ‘My Mother, The Mermaid’ suddenly deviates into very unexpected territory and this ultimately turns it into something that much more intriguing.

For the majority of the duration, this is a beautifully crafted fantasy love story that uses the freedom of the genre to examine the finer emotions. Suddenly the characters are turned from the unappealing underclass of Seoul to the virtuous islanders, the familiar elevation of the pastoral as opposed to the big bad city. As predictable as it is, this change in tone is soaked in effective pathos and moments that are genuinely mollifying. Jeon Do-Yeon is captivating as the younger version of Yeon-son, full of naivety and subtle determination. The romance between her and Park Hae-Il is just about as charming a relationship as has ever appeared in Korean cinema.

It is regretful that two strong sections of the film cannot be more logically linked though. The fault is not the narrative, but the vast differences between the two portayals of Na-young’s parents. Writer and director Heung-sik Park must take the lion’s share of the blame for not affectively showing how Yeon-son turned from angel to ogre; a few lines are used to explain her belittling of the man she was so passionately in love with at the end, but this is never enough to justify such a remarkable transformation. Without that progression, ’My Mother, The Mermaid’ wastes its chance to rub shoulders with the genre greats. That said, this is still a superb romantic drama that should delight the aficionados and squeeze a few tears out of even the hardiest soul. That in itself makes this highly recommended.