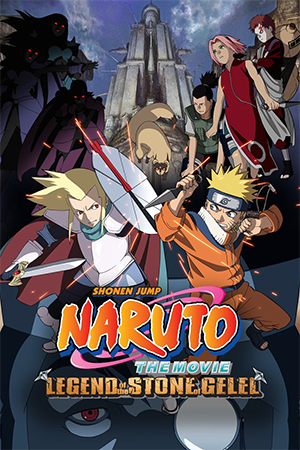 With Naruto’s main ally/competitor Sasuke now AWOL, Team 7 is temporarily down to two. Luckily though, there are plenty of other trainee ninja in the village of Konoha to help out with all of the important missions.  On this particular outing, Naruto is teamed with Shikamaru and Sakura to complete the rather mundane task of locating a missing ferret.  Then again, trouble seems to follow Naruto around like a bad smell and the group soon encounter a small army of heavily armoured and seemingly invincible warriors.  After duelling with their leader, Naruto is knocked into a cavern where he is nursed back to health by a friendly band of travellers.  Unfortunately, his opponent is also taken in by the same travellers and although he now seems passive enough, Naruto still has his doubts.  When the mysterious warrior decides to leave the group, Naruto follows him and uncovers an apparently innocent plan to rid the world of all wars.  Of course nothing is ever what it seems in this world and it appears that these people have a hidden agenda behind their peaceful plans.

Having been less than enamoured with Naruto’s first cinematic outing, I approached this sequel with a fair bit of apprehension.  However, I’m pleased to report that ‘Naruto The Movie 2’ is a marked improvement over its predecessor and I’d even go so far as to say it manages to recapture an essence of the original series.  For one thing, the atmosphere of this film is a lot darker, with a legitimate storyline (albeit one separated from the anime) and a solid sense of adventure that was capable of keeping me engrossed throughout. The action on display is also pushed up a notch, with particularly notable duels in both the opening and closing of the film that even find time to throw in a few variations on Naruto’s somewhat over-familiar signature moves.  As an added bonus, side characters like Gaara and Kankuro make an appearance, which assists in maintaining a sense of association with the show. It also gives us another welcome chance to see some of their impressive ninjutsu techniques.

Although ‘Naruto The Movie 2’ clearly caters more to fans of the franchise, it’s still nowhere near the perfect big screen adaptation of the source material.  My main problem with this particular outing, and one that I also felt plagued the first film, is that there is an obvious lack of recognisable traits in the main characters.  Admittedly Naruto does still retain his dogged persistence that always keeps him coming back for another dose of punishment, but the majority of the other characters seem to do nothing more than fill in a few of the gaps.  Sakura, who was a major character in the manga/anime, has very little to do here and her relationship with Naruto is practically non-existent. Meanwhile, the welcome reappearance of Gaara is soured by the fact that his persona seems to be a mere shadow of his former intimidating self.  The new players for this outing are also instantly forgettable and it’s disappointing that the writers constantly see the need to add a “troubled” teen into the mix and then bore us with another supposedly emotional back-story.

Although it’s still far from the quality we have come to expect from the manga and anime, ‘Naruto The Movie 2’ is clearly a much more fitting slice of Ninja pie to entertain fans between episodes.  With a third and fourth part already completed, here’s hoping that the creators continue on this upward spiral as it’s evident that Naruto still has plenty to offer.