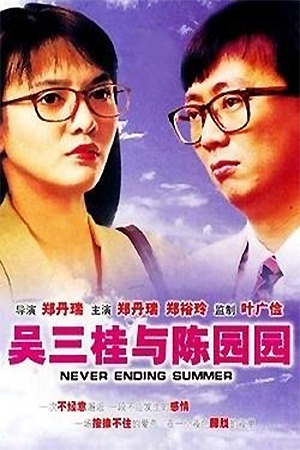 After working tirelessly in Hong Kong while his wife looks after the new family home in Vancouver, Chan (Lawrence Cheng) flies West to join her and savour his new life. He lands in Canada filled with anticipation and desperate to meet up with his beautiful wife once again, yet the reality turns out to be quite different. The home is indeed immaculate, but his spouse has destroyed Chan’s picture of happiness by moving her Canadian boyfriend in. Thrown out of his own home and helpless in the knowledge that it is in her name, Chan scours his address book to find any contact in the city. He finally happens upon the sister of an old classmate and she agrees to look after him during his recent upheaval. The contact, Madam Kwai (Carol Cheng), is the yobbish owner of one of Chinatown’s biggest laundrettes and gets her new charge to work off his debt to her by helping with the daily workload. Kwai may be overtly masculine in appearance and manner, but she quickly warms to Chan and tries to find out if he feels the same way too.

‘Never Ending Summer’ is a brave attempt by director/star Lawrence Cheng to take the rom-com out of the confines of Hong Kong and allow it to breath in a new environment. As soon as the opening credits roll and the camera follows Chan’s journey through Vancouver, it is clear that he has partially succeeded in doing so. It may prove to be a good, though unremarkable film, but the move outside of the East is a resounding triumph. The whole production appears slick, well-lit and has aged better than many of its contemporaries have done.

The on-screen innovation – from the excellent location photography to the wise decision to use sync-sound – all pay off, giving ‘Never Ending Summer’ an instant hook creates an instant symbiosis with the storyline. Unfortunately a little more care should have been taken with the amateurish sounding soundtrack. The muzak that plays throughout key scenes is a major distraction and does no favours to an otherwise professional production. It becomes an increasing problem when the superb Carol Cheng is effortlessly displaying her thespian skills only to have her words overshadowed by a Bontempi-style track.

‘Never Ending Summer’ features a solid lead pairing with Lawrence Cheng more than just the simpering buffoon he usually plays and Carol Cheng her usual, engaging self. The storyline of odd couple love maintains interest for most of the 90 minutes or so though it proves a mistake to allow Chan’s awful wife get away without her just desserts. Nonetheless, it is a film that ambles along pleasantly and gives the performers an opportunity to take centre stage without any woeful comic asides shoe-horned in.