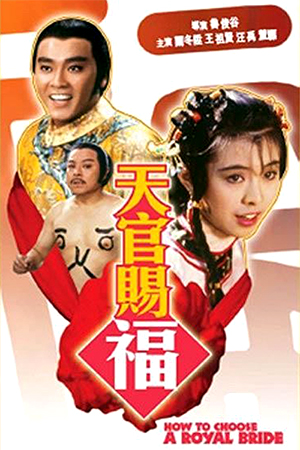 Derek Yee plays the young emperor Kangxi who is attempting to select a bride. His mother has arranged for young available women to visit him so that he may choose. Kangxi is uninterested and becomes bored of the process. He decides to travel incognito as a wealthy businessman with his two trusty aides (played by Bill Tung and Wong Yu) around the country looking for some excitement. Meanwhile, Nalan Qing Yao (Joey Wong) is also looking for adventure and to avoid meeting the emperor for a possible arranged marriage. She decides to disguise herself as a man and travel to the town of Jiangnan.

This movie is a change of direction for Liu Jun Guk who is the man who helmed such Shaw classics as ‘The Bastard Swordsman’ and ‘Holy Flame of the Martial World’. Here, instead of swordplay or crazy sorcery is a romantic comedy. In fact if you’re watching this film for an action fix then you’ll probably be disappointed. Despite a cast that includes kung fu film veterans such as Derek Yee, Wong Yu, Lo Lieh, Sun Chien and Chen Kwan Tai, there is very little in the way of fighting. There are brief moments of action but it’s more of a garnish rather than a main ingredient.

What we have here is a light, episodic comedy that plays rather like a TV serial. Problems arise that the characters need to use some simple logic to solve and then its onto the next (and sometimes) unconnected set piece. This means the film lacks a strong central narrative and might seem to some meandering and disjointed. It may seem at the beginning that the film will be a simple boy meets girl (who’s pretending to be a boy) but in fact, Yee and Joey Wong take a backseat for a large portion of the movie as the exploits of Uncle Bill and Wong Yu take over. This isn’t a problem though as Wong and Tung are thoroughly charming and make a fine onscreen duo. Yee does a very good job of playing the emperor, giving him a nice balance of intelligence and naivety. Joey Wong is far too beautiful to be convincing as a man (doesn’t stop anybody else being fooled of course) and brings a feisty, playfulness to her character.

Some may not like ‘How To Choose A Royal Bride’ because of the episodic nature of the story but this is some fun if rather slight entertainment.