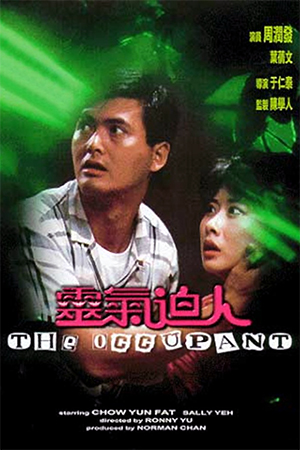 Angie (Sally Yeh) arrives in Hong Kong to do a thesis on Chinese superstition. As she can’t afford the local hotel rates she rents a flat from Hansom Wong (Raymond Wong). Coincidentally Hansom is highly superstitious and takes the liberty of giving her a tour of everything superstitious in Hong Kong. He does of course have a hidden agenda as he has been quite taken in by Angie and constantly makes unsubtle advances. It soon becomes apparent that the reason the flat is so cheap is because it haunted and Hansom finds himself thrown out of the window by the ghost. His fall is broken by a neighbours car which in turn gets broken by his fall. As a result the police are summoned and the officer called to the scene is Valentino Chow (Chow Yun Fat). Valentino also becomes interested in Angie and a rivalry with Hansom ensues. Angie becomes interested in the concept of this ghost as she thinks it will make great material for her thesis, so she starts to investigate the history of the previous resident. Valentino worried for her safety takes her to see spiritual advisor Chan (Lo Lieh). However Angie takes it upon herself to go against his advice which only puts her in more danger than she could have conceived.

‘The Occupant’ doesn’t appear to be sure if it wants to be a horror or a comedy as while it is genuinely funny, this does tend to undermine the horror elements. Though firmly rooted in Chinese superstition,  it often has a slightly western quality. It is therefore no surprise that the director is Ronny Yu whose earlier film ‘The Postman Fights Back’, gave a genuine western feel to a Kung Fu film.

‘The Occupant’ ambles along fairly nicely without ever wowing the audience. We are however subjected to a twist ending which could have lingered in the mind long after the end credits had finished rolling. Sadly this is made redundant by the insertion of an epilogue intended to give it an upbeat ending.

Chow gives another quality performance as indeed does Yeh. Raymond Wong is nauseating, which seems to be a role Wong is very good at playing. Lo Lieh makes a pleasantly surprising turn as the spiritual advisor showing himself to be more versatile than his usual roles of simply playing kung fu villains and gangsters.

A fairly standard comedy/horror sadly ruined by the upbeat epilogue.