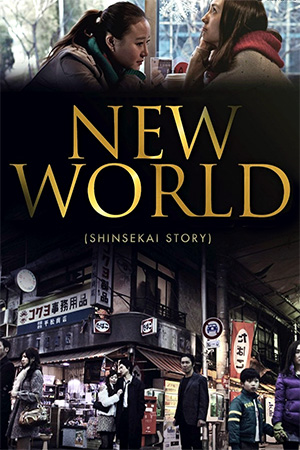 Coco (Shi Ka) lives a privileged life in the very modern world of Beijing. Gliding through the clean, crisp, neon city with her friends and successful boyfriend, Coco decides she wants to spend a romantic Christmas in Japan. Her friend Ivy has already relocated there and can set up Coco with accommodation. However, a fight with her boyfriend means Coco ventures to Japan on her own and a misjudgement from her friend Ivy means she is booked into the low rent hostel run by the desperately-trying-to-make-a-go-of-it Masa (Takeru Ogawa). Finding her new digs are far from the fancy and luxurious hotels she was expecting, Coco soon finds herself thrust into a world she never expected, nor has experienced, as she is propelled onto the vibrant streets of Shinsekai and gets caught up in all kinds of misadventures with Masa and his money troubles with local wannabe gangster, Watanabe.

On the one hand, ‘New World’ is an often sweet and gentle ride through an eclectic and culturally rich Japanese neighbourhood that sees a somewhat spoilt modern loving girl learning a few life lessons. On the other hand, Lim Kah-Wai’s film suffers from being, well, just a little too indie for its own good. For every scene that is touching and richly captures the way of life of the neighbourhood, there is a scene that is drawn out, goes nowhere and just smacks of the director yelling, “do less, do less, do less.” The free form structure of the film, Coco flitting from situation to situation, certainly coveys the sense of our protagonist adrift in an alien world with the director seemingly having shot everything on the fly in the local neighbourhood: this in turn giving the film an authentic travelogue aesthetic. However, and despite the often impressive photography, this means the film can feel unfocused and makes it difficult to always engage with the characters. Coco, who some may have trouble warming too, and her transformation from a materialistic modern girl to one who comes to appreciate real friendship no matter where you find it is all just a little too, well, inevitable. Proceedings are rarely surprising and it all reaches a predictable, though admittedly heat warming, climax.

Yet, ‘New World’ does have charm. The collection of sweet and odd-ball characters Coco meets are often fun and the non-professional cast do well for the most part. Not least, the young actor Tomonaha Komei who plays a young Chinese speaking Japanese boy Coco encounters and who acts as a sort of guide and communicator for her. The scenes they share are often pleasantly tender and feel like we are watching real people interact with one another. A fiercely independent feature, sometimes to its own detriment, ‘New World’ is still a fascinating travelogue and fish-out-of-water escapade that is oddly charming.