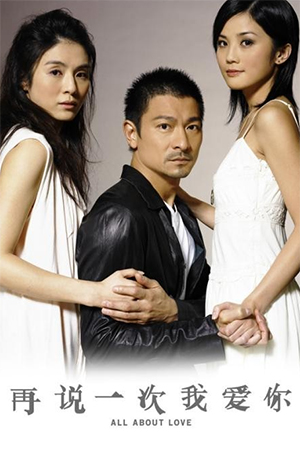 While ‘Wait ‘Til You’re Older’ was still packing in theatres in the autumn of 2005, Andy Lau’s second big feature of the year was released. ‘All About Love’, though, is a seemingly less commercial feature, meditating on love, mortality and missed opportunities.

Successful doctor Ko (Lau) finds the rigours of his profession keeps him away from his devoted wife (Choi) and cause him to cancel their nightly dinner arrangements on a regular basis. Such actions come back to haunt Ko when his beloved is killed in a tragic car accident and he is left with nothing but his painful memories of their love for one another. Time passes and the doctor is just a shell of his former self until he saves Sam (Yeung), a woman who has been involved in a car accident not far from where he is on duty. Ko is strangely drawn to the patient and observes her recovery while learning more about her from her doctor (Wong). When he then discovers that Sam was the recipient of his late wife’s heart after her untimely death, he sees a way of recalling his past through her.

‘All About Love’ is a strange creation, at times emotionally ripe and full of moving angst, then clinically distancing and icy. The two threads naturally make an incongruous whole and the finished article is therefore difficult to make a proper connection with. Such a statement is uttered even before one considers the dubious nature of the storyline; the idea of our ‘hero’ becoming obsessed with Sam due to her connection to his wife – an action not commented on by any of the other background characters – is an uncomfortable narrative pivot.

Director Daniel Yu does manages to get professional performances from his cast despite the story’s problems. Andy Lau is not especially stretched in his twin role, but a few of the more powerful moments show him at his best; an ingenious flashback to his daily routine with his wife is clever and strangely touching, a relatively rare example of strong chemistry between the leads. Lau’s second character, Derek, is not particularly fleshed out and so the majority of the dramatic weight falls on Ko and the actor’s portrayal of a man torn apart by grief. Charlene Choi gives one of her better recent performances, dispelling the fear that she’ll be the clichéd moody and frivolous harpy she invariably seems to be cast as.

Her overall appearance adds a certain weight to a production that becomes needlessly impersonal, though the significant age difference between her and Lau is constantly nagging at the back of the mind.  Yu manages to avoid melodrama, but in so doing manages to turn the story into a faintly awkward drama that ignores some gaping flaws of logic in the film. The aforementioned compulsion of Ko could have been a tragic portrait of how the loss of love can tear someone apart emotionally, but it takes a deviation into a character supposedly righting wrongs in the marriage of two people he has no real connection with. That such decisions result in a very comfortable ending where the eventual deception is accepted without question is bewildering.

‘All About Love’ is at its best when it allows the viewer to develop empathy for the characters and understand the feelings that are affecting them. When the main story takes centre stage, the viewer’s interest is likely to be lost and the plot-holes difficult to reconcile. It therefore becomes a diverting production rather than a truly absorbing one.