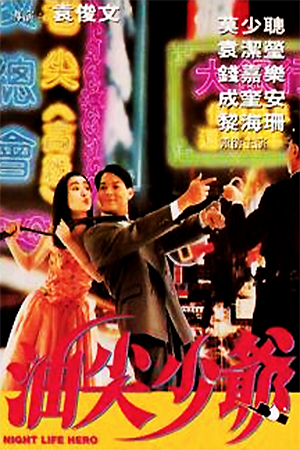 Chung (Mok Siu Chung) and Peter (Chin Kar Lok) are two loyal friends who move from scrape to scrape with the latter often being saved the former. When a loan shark (Shing Fui On) and his heavies start to put considerable pressure on Peter because of his copious debt, Chung devises a plan that puts the villains behind bars. This proves to be especially well-timed when Peter announces that he is getting married and Chung himself finds also falling in love. Unbeknownst to Chung though, his new love is in fact the daughter of a wealthy real-estate tycoon and all of his subsequent attempts to earn a living are all being orchestrated by his potential father-in-law. These tests are put into perspective when Chung’s nemesis is freed from prison and immediately sets his sights on revenge.

‘Night Life Hero’ is the kind of predictable, clichéd action comedy that the average high-brow film critic would flush down the u-bend rather than consider ‘cinema’. Thankfully, for those of us who enjoy a flirtation with good, fun-filled 80s Hong Kong cinema will forgive the numerous holes in the production and appreciate it for its outstanding fight sequences and cloth-eared comedy. Yuen Chung Yan manages to just about achieve an equilibrium between the numerous action set-pieces and the naive comedy that, in moderation, makes this particular period of Hong Kong film-making such an ebullient joy.

The plot is the standard poor boy falls in love with rich girl who subsequently tries to hide her identity – not really a storyline that stands up to close scrutiny. This golden age of the Jade Screen was awash with tales of loveable scamps wanting to leave their life of crime behind and ‘Night Life Hero’ remains true to this well-trodden path. Mok Siu Chung does justice to the familiar character type he’s landed with, mixing together a street-wise style with the more vulnerable side that the love interest in these films is destined to find. Nonetheless, such aspects take a back-seat to the plentiful action which champions the invention and excitement a great choreographer can bring to the screen. In these days of CGI-drowned action films, such human endeavour is easy to admire. Only when ‘Night Life Hero’ gets too bogged down in supposed pathos does it lose its considerable momentum. Until that desperate sag half way through, this is an oft-ignored flick that will spark a pleasant feeling of nostalgia in us all.