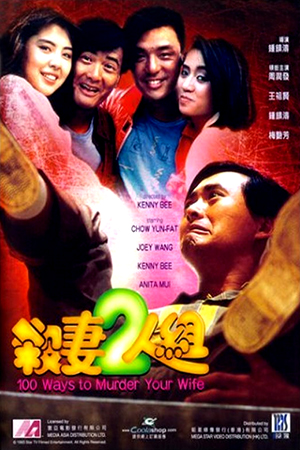 Two well-respected footballers meet one night in a Hong Kong bar. Kenny (Bee) is a highly rated striker for a popular team while ‘Football Fa’ (Chow) is a star goalkeeper. Over a few drinks, the pair share compliments and, as the evening draws on, their problems. As things turn out, both of these cowardly men have the same major problem: their wives. Kenny’s wife (Mui) constantly nags him and designs outrageous outfits that she insists he wears. Meanwhile Football Fa is insanely jealous about his beautiful wife (Wong) and her popularity with his team-mates. Falling into a drunken stupor, both men foolishly agree to get rid of each other’s wives. Football Fa seems to have succeeded when he goes to Kenny’s house and wakes up thinking he has done the deed. In actual fact, Kenny’s wife has left thinking that her husband is with another woman. These two misunderstandings remain hidden though and Football Fa, recovering from the distressing thought of being a murderer, insists that Kenny returns the ‘favour’. What follows is an elaborate series of ideas to achieve this dubious goal and get away with it free from blame.

What may sound like an unpleasant crime thriller because of the concept and title is actually another of the comedy films that Chow Yun-Fat made earlier in his career. Effectively a farce version of Hitchcock’s ‘Strangers On A Train’, ‘100 Ways To Murder Your Wife’ is very light-hearted and, unbelievably, gentle in nature. Although the concept still sounds quite harsh, there’s no doubt that the two main male characters are totally devoid of brains and therefore offer very little threat. As a good-natured caper, this is an enjoyable movie with four performers who nearly always entertain. As a comedy though, ‘100 Ways To Murder Your Wife’ is simply not as hilarious as it should have been. The usual farce elements are thrown i.e. misunderstandings and frantic behaviour, but there’s little about them that’s genuinely amusing. Therefore this never has the hold on the viewer that it could have achieved and instead offers just a few moments of genuine quality. Nonetheless, director Kenny Bee creates an atmosphere that makes the film watchable despite its faults. This is a plus point that was shared by many of those lovable 80s Hong Kong comedies that are sorely missed. Good, but not great.