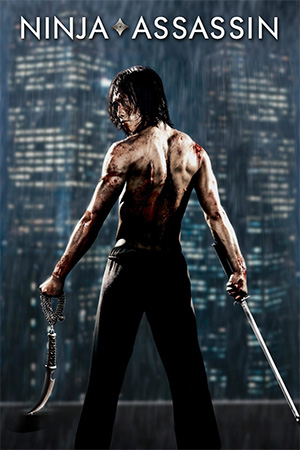 There will be blood. That should have been the tagline for ‘Ninja Assassin’, an ultra violent throwback to the 80s heyday of ninja movies, that features so much dismemberment, disembowelment and demented carnage it probably would have been banned if released back in the 80s. Yet, in these less conservative and BBFC interfering times, ‘Ninja Assassin’ brings blood back to a lost genre and makes for a fine piece of claret spraying, ninja star throwing, mega violent excess.

Quite simply the tale of bad ass ninja Raizo (Rain), trained by the Ozunu clan to become the ultimate killing machine, who has turned against his clan and is attempting to hunt them down. Outcast but still very much skilled in the art of killing, Raizo teams up with an unlikely partner, Europol agent Mika (Harris), who has been investigating the links the Ozunu clan has to organised crime: hiring out their deadly warriors to perform assassinations. She herself has become a target and the two set off across Berlin (which makes for a nice change of setting) fleeing an ever swarming army of shadow warriors.

Ok, first off it’s not the 1980s anymore, so despite being a throwback to all the great ninja flicks from that time (‘Revenge of the Ninja’, ‘Pray for Death’, ‘Ninja 3: The Domination’, ‘American Ninja’), ‘Ninja Assassin’ isn’t and was never going to be just like those fun time flicks. For one, it’s far too slick, professionally made and bloodier than all those films combined. Those expecting a 1980s ninja experience all over again will be disappointed and  while ‘Ninja Assassin’ certainly pays homage to those films, this is a 21st century ninja flick: stylised, over-edited and (unfortunately) using CGI blood over practical effects. What it does share with those 80s classics is their cool fights, comic book plotting and complete disregard for logic. Yep, it’s a ninja movie alright. ‘Ninja Assassin’ has all kinds of absurd things going on: like ninjas who heal the most severe bodily harm by just breathing a little slower; ninjas that disappear and reappear; ninjas who are run over and knocked down by cars but are up and walking around in the next scene. This is allowed: it’s a ninja movie. The ninja movie exists in a comic book world and ‘Ninja Assassin’ embraces this ethos with gusto and takes the viewer on a dark and wild ride.

Subtle it isn’t but ‘Ninja Assassin’ doesn’t punk out on the violence or action and certainly doesn’t water anything down. If fanboys want an ultra violent, bloody fight film then they got one: nothing has been held back. The story may be straightforward but works within the frame of the type of film ‘Ninja Assassin’ is. I mean, it’s called ‘Ninja Assassin’: it doesn’t really call for an overly complex plot. There is a nice flashback structure to the film cutting between Raizo in present day and his training as a child at the Ozunu temple. Arguably the training scenes are the best portion of the film as we learn how Raizo became the warrior he is and the events that lead him to betray his clan and teacher (the great Sho Kosugi, star most of the best 80s ninja movies). As mentioned, the action is a little over edited and stylised, suffering from the incessant need by Hollywood to cut action MTV style: rapid fire edits to give us the feeling that something amazing is happening instead of actually showing us something amazing happening. James McTeigue should know better having helmed the rather decent ‘V for Vendetta’ and been assistant director on ‘The Matrix’ trilogy (which wisely showcased action scenes that opened up the action so we could see what was happening). However, it’s not completely ruined, just a little infuriating. The action is still well handled and McTeigue crams the film with big bloody set pieces. The opening sequence is so over-the-top gory it would have got the film banned at one time and come the second half, the flick pretty much turns into a running battle between Raizo and the ninjas. Much of the enjoyment of the action comes from Raizo’s weapon of choice: a large blade attached to a long chain that he swings and swishes to slice and dice the enemy with wild abandonment.

This is certainly not a flick for mainstream critics (who have non-surprisingly ripped it apart) and while it could have eased up on the over stylisation of the action, ‘Ninja Assassin’ is still a big, bloody hoot. Dark, violent and just a little corny, it is nevertheless great to see ninjas back on the big screen and for pure unadulterated, face slicing, sword wielding, comic book fun; ‘Ninja Assassin’ is hard to beat.