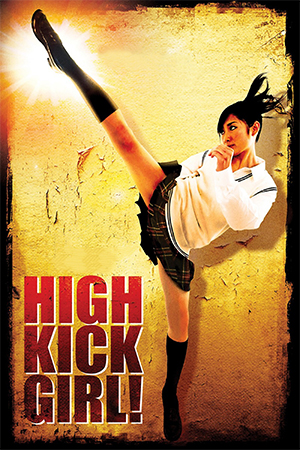 Japan embraces the rejuvenated fighting femme sub-genre – one that has traditionally been the preserve of Hong Kong and especially Thai cinema recently – with ‘High Kick Girl!’, a vehicle for eighteen year old karate champion Rina Takeda. Yet what soon becomes apparent is that it clearly takes more than a cutie pie superkicker and an avalanche of action to make a memorable feature.

Bellicose schoolgirl Kei (Takeda) is eager to secure her black belt in karate and has no qualms about challenging every competent practitioner in the city to one-on-one duels, fights she invariably wins. Matsumura, her master, is less convinced by her attitude and insists she learns all kata instead of letting her temper get the better of her. Furious with the constant rejection, Kei decides to join the dark side and throw her lot in with ‘The Destroyers’ – a ruthless karate school that doubles as a criminal organisation. Though Kei is initially drawn to their skills, she is eventually forced to reconsider her allegiance when Matsumura’s school is their next target.

Viewers don’t have to wait more than a few minutes to see the girl who could be ‘the next big thing’ in action. In fact, even the least patient acolyte will have to wait a mere few hundred seconds between fights, so tightly-packed is the karate therein. However, while this sounds like a magical formula to alleviate boredom, the problems with ’High Kick Girl’ become reasonably obvious.

In a much derided – sometimes fairly, often not – genre, there is a certain skill in mounting action in such a way that ensures each succeeding scene creates a feeling of anticipation. Even the least ambitious ‘One-armed Shaolin Drunken Ninja’ kind of film tries to provide fillers between fights and shape the characters away from action – however completely inept this might be attempted. ‘High Kick Girl’ is more like a montage of fight scenes that, with little context provided and characters barely registering as human, becomes monotonous. Seeing some highly skilled performers pulling off unbelievable moves is always a great distraction, far more impressive than the latest special effects; ‘High Kick Girl’ offers a good selection of these rewind-worthy moments – though the film-makers rather over-enthusiastically replay just about every kick above waist height. But battle fatigue begins to kick in and seeing bland ciphers going toe-to-toe is inevitably a frustrating experience, not to mention our heroine hardly being the most sympathetic protagonist.

After a solid thirty minutes of this deadly earnest and strangely stoic film, an unusual nostalgia might invade the thoughts of genre fans as it did me. I found myself wishing for the awkward insertion of a Dean Shek-style kung-fu oddball just to breathe some humanity into the proceedings. Such appearances ruined endless independent genre films of the late 70s, but ‘High Kick Girl!’ could utilise something as bizarre as this to disrupt the monotony. It’s hoped that future projects for the new young action heroine of Japanese cinema at least try to build a story – complete with the incidental scenes ‘High Kick Girl!’ jettisons – that will help viewers care about what happens, and stop reviewers like myself desperately waiting for something surreal to happen to create a welcome distraction.