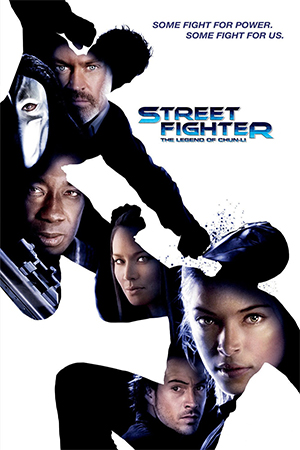 When Capcom first announced their intentions to make a new live-action ‘Street Fighter’ movie, fans everywhere had horrific flashbacks of the 1994 Van Damme outing. When further news filtered through that this would in fact be a Chun-Li origin story starring ‘Smallville’s Kristin Kreuk, it was just about enough to send a few hardcore gamers into cardiac arrest. So, were the fans right to be afraid or is this finally the film to put the ‘Street Fighter’ franchise back on the Hollywood movie map?

As a young girl, Chun-Li (Kreuk) is a devoted daughter who enjoys playing the piano and practising Wushu with her father. One night, her peaceful existence is shattered when the evil tycoon Bison (McDonough) abducts her father and assaults her mother. Years later, Chun-Li has grown up to become a respected young woman as well as a talented concert pianist. Sadly though, her mother is slowly losing the battle with cancer and Chun-Li feels she is no closer to discovering the whereabouts of her father. However, the arrival of a mysterious scroll leads her to a man named Gen (Shou) who happens to be the leader of a crime-fighting organisation. Gen tells Chun-Li that he can lead her to Bison and after a rigorous training regime, the two finally set out to seek justice for all of Bison’s wrongdoings.

The plot for ‘The Legend Of Chun-Li’ veers quite drastically away from the character’s origins in the video game. Gone are the “minor” details such as Chun-Li joining Interpol or entering Bison’s tournament in an undercover capacity, and instead we are left to endure a very simple and exceedingly bland revenge saga. Essentially, it’s really nothing more than the tale of a spoilt little girl who sees her parents victimised (and eventually killed) by a businessman so she decides to exact her revenge.  Quite how they managed to dumb it down to such a preposterous level is beyond me but sufficed to say, there’s no meat here and it’s very easy to predict exactly how it will play out. The addition of a narration from the lead character to fill in the gaps also shows that their was a distinct lack of confidence in the story from either the director or the producers.

‘The Legend Of Chun-Li’ is equally lacking when it comes to the characters.  No attempt is made to flesh out Chun-Li’s personality and we are just expected to connect with her simply on the basis that she has endured such hardships. Unfortunately though, as any decent filmmaker will tell you, we need to be able to empathise with the central character before we can start to care about her predicament.  Likewise, we need to feel the fear emanate from the bad guys but this isn’t very effective when Bison is given one of the most laughable back stories in movie history. And of course, what cinematic turd would be complete without the stereotypical cops who serve no purpose whatsoever other than to look pathetic and helpless until they get some assistance from our heroine.

The cast for ‘The Legend Of Chun-Li’ includes quite a few recognisable faces so you may be excused for expecting it to be passable in the acting department. Unfortunately though, this simply isn’t the case as the majority of the actors are either completely miscast or just not up to the challenge. I was a big fan of Kristin Kreuk in ‘Smallville’ but on the strength of her performance here, it’s clear that she’s not yet capable of carrying a film by herself. She doesn’t do anything particularly wrong but she just lacks the required presence to make a strong leading lady. Meanwhile, the normally reliable Neal McDonough makes for a very weak Bison and the character winds up being about as fearsome as your local lollipop lady. As for the likes of Michael Clarke Duncan or Robin Shou, their roles are really little more than extended cameos but the little impressions they do leave are fairly sour.

When it comes to the action sequences, you might assume that ‘The Legend Of Chun-Li’ would redeem itself but unsurprisingly it fails to take advantage of its fighting roots. The main issue here is the over-reliance on wires as the film uses them in pretty much every scene, for everything from flying kicks to simple acrobatics. Director Andrzej Bartkowiak, the “genius” behind masterpieces such as ‘Cradle 2 The Grave’ and ‘Romeo Must Die’, doesn’t help matters either as he uses the typical quick cut editing techniques and has an odd fetish for shooting everything from a top-down perspective. Much like its 1994 counterpart, ‘The Legend Of Chun-Li’ also overlooks the video game’s over-the-top special moves and the closest it gets is with a crappy looking fireball and one use of the spinning birdkick, which does nothing more than show off Kreuk’s granny panties.

Hollywood had fifteen years to learn from their mistakes and yet somehow they still managed to make another bad ‘Street Fighter’ movie. Personally, I don’t understand the constant need to alter the source material or avoid the obvious decision to make a basic tournament movie. Maybe next time they should consider the ‘TMNT’ CGI route because it’s clear that they are totally devoid of ideas when it comes to doing live-action.