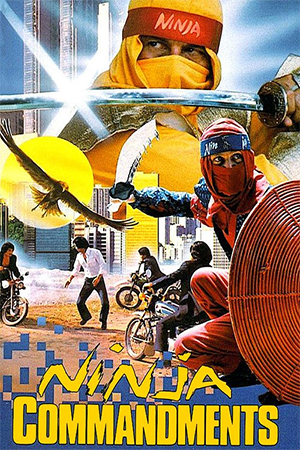 In an attempt to put their Ninja lifestyle behind them, Rodney and Janet retire to the countryside to raise a family. As the old saying goes though, you can’t run away from your past and the couple soon find themselves the target of a rather unpleasant gang. When Rodney is framed and put in prison, Janet is left to look after their son alone. Meanwhile, back at the clan the Ninjas are facing a fierce internal struggle as the dastardly Stewart attempts a takeover. When Gordon returns from a mission, he soon uncovers the truth and the stage is set for a final face off of epic proportions.

‘Ninja Commandments’ is another typical IFD outing that pastes a handful of western ninja footage into a completely unconnected (and probably cheaply acquired) homegrown production. On this particular occasion though, the concoction is even more baffling than usual as the main feature is a drama that focuses around a struggling single mother who is hideously disfigured in an accident. As you would expect, when interspersed with scenes featuring garishly clothed ninjas, the dramatic elements don’t really have the desired effect and even the unintentionally amusing dubbing doesn’t help to make it anymore interesting. Luckily though, the ninja segments do go a long way to rectifying this, with Richard Harrison putting in another star turn as Gordon The Ninja and Dave Wheeler making for an extremely amusing adversary.

When it comes to the fight sequences, these are often few and far between but they are always consistently entertaining. Despite being blatantly sped up, the choreography and abilities of the performers are top notch and we are treated to a solid mix of acrobatics, hand-to-hand and weapon work. Admittedly it isn’t anywhere near the standards of a true martial arts classic, but there is something about seeing two combatants leaping into battle with Ninja branded headbands that always brings a smile to my face. Throw in some mystical ninja powers and an awesomely cheesy 80’s soundtrack, and it could well be that ‘Ninja Commandments’ offers up the perfect brand of IFD action.

As with a lot of IFD movies, watching ‘Ninja Commandments’ can often be excruciatingly painful as the majority of the film is downright awful. Thankfully though, the ninjas are on hand to save the day and if you can stomach the sequences in between you’ll be rewarded with a healthy helping of ninja-on-ninja action.