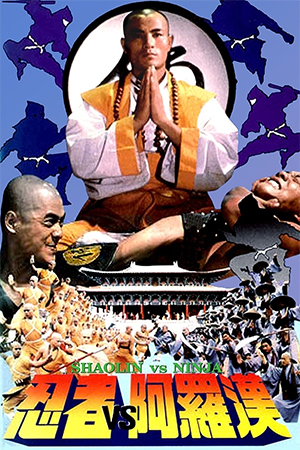 The local Japanese inhabitants have long since craved the land occupied by the Shaolin temple and are just waiting for an excuse to snatch it from under the monk’s noses.  When a Japanese monk arrives to advocate peace, he is murdered and the Japanese seize their chance to force an investigation upon the temple.  To help pile the pressure on the monks the Japanese hire a clan of Ninjas in the hope that they will force them into combat, thus condemning their good names.  Unwilling to be brought into such petty arguments, the Shaolin organise a friendly tournament within their temple so that the Ninja will be taught a valuable lesson.  Which side will emerge victorious and will the Shaolin be able to restore their reputation?

‘Shaolin Vs. Ninja’ is a fairly typical example of a cheaply made kung fu flick that is just looking to cash in on other, more successful movies from the era. The total lack of creativity is evident throughout and the film just cobbles together the most basic of plots as an excuse for some action. To make matters worse, the main star, Lo Rei is bizarrely limited to an extended cameo and the film noticeably suffers from the absence of a central character. This means that only the fights are left to entertain and while it’s fair to say that the tournament is pretty fun, it’s not really enough to overlook the other issues.

‘Shaolin Vs. Ninja’ is a cheap-as-chips kung fu movie that brings absolutely nothing new or remotely interesting to the table.  The fight scenes are the films only saving grace but even they aren’t enough to make it a worthwhile watch.