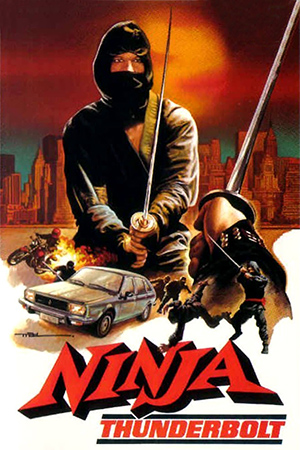 After he leaves the ninja empire, Li Chieh turns to a life of crime. However, a routine safe theft goes horribly wrong and he ends up driving his car off a cliff. Although the police assume he is dead, Chieh actually washes up on a beach and is taken in by a young girl named Sara. It just so happens that this girl and her father are also involved with the police as they have reported a valuable Jade horse statue as stolen. The police assign detective Harry to the case but he is unconvinced by their story and believes that Sara is just looking to claim the insurance. Meanwhile, Chieh is starting to recover from his injuries and when he finds a detective sniffing around his back door, the two begin a game of cat and mouse that will eventually result in a vicious showdown.

Judging solely by the list of actors involved, one could easily be forgiven for thinking that ‘Ninja Thunderbolt’ may well be something of an unsung classic. The idea of teaming the talents of Wong Tao and Yasuaki Kurata with everybody’s favourite Garfield-loving gweilo, Richard Harrison certainly sounds like an intriguing prospect. Unfortunately though, as is often the case with IFD efforts, ‘Ninja Thunderbolt’ is in fact your typically confusing combination of two or three different features clumsily spliced together. This is a bit of a shame really as the segments that see Tao and Kurata going toe-to-toe show some potential, but thanks to the ridiculously made-up plot and some randomly inserted Harrison footage the whole thing makes about as much sense as a banana riding a tricycle. Of course, if you’re already familiar with the IFD style of filmmaking then you’ll probably still be able to extract some kind of entertainment, but anyone expecting a kick ass kung fu flick will definitely be disappointed.

Speaking of kung fu, there are still a few mildly enjoyable fights and stunts that go some way to redeeming ‘Ninja Thunderbolt’. By far the best of these bits are those featuring Wong Tao, as he gets involved in several scuffles that showcase everything from swords to sai. Although these scenes are hardly the cream of the crop, Tao has always been a consistently talented fighter and he certainly still looks the business here. Similarly, Yasuaki Kurata is his usual reliable self and even though he is often pushed into the background by the other spliced in segments, the fights he is involved in always have some hint of quality. As for the ninja sequences, it may well surprise you to learn that these are extremely sparse and there isn’t even a hint of the garishly garbed ninjas that we have to come to expect from IFD outings. In fact, the only notable moment that does involve ninjas features some pink rollerskates and a tiny car, but I’ll say no more so as not to spoil it.

‘Ninja Thunderbolt’ is a fairly standard entry into the IFD back catalogue that boasts plenty of cheese but not much in the way of genuine quality. If you’re happy to laugh along with it then you’ll still find something to appreciate, but a kung fu classic this is not.