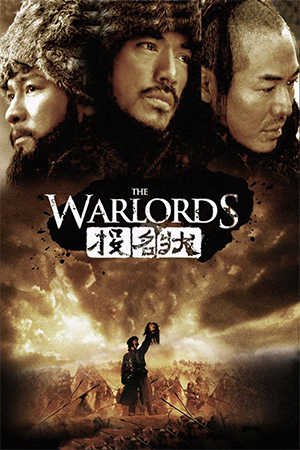 A big, bad, gritty epic, ‘The Warlords’ shoves dirt and dismemberment with wild abandonment at the unsuspecting viewer but also manages to engage on a human level as it tells the story of three “blood brothers” who fight together in a war that may just tear them apart. Li plays General Qunigyun the only survivor of his battalion in a bloody war. Wandering aimlessly into the countryside he is taken in a by woman, Lian (Xu), who nurses him back to health and the two fall for one another. However, Lian is also in love with Erhu (Lau) the sort of leader of the village and who takes a liking to Pang. Along with their third “brother” Jiang (Kaneshiro) the three make a pact to protect the people of the land and take it back from the evil grip of Taiping. Building a relentless and loyal army the brothers tear across the land driving the opposing army out. Yet, the brother’s loyalty is pushed to breaking point, as while Pang’s intentions to bring peace to the land are noble he is not above heartless massacre to achieve this. This strains his and Erhu’s relationship and, like the undoing of many a great war leader, the woman they both love threatens to tear down everything they have fought for.

Despite the tendency to overdo the heroic aspect with intrusive and sometimes inappropriate music and the need for the main characters to over egg their loyalty, ‘The Warlords’ is a surprisingly straight forward and therefore more effective epic war movie. This is not a flashy costume drama or a CGI enhanced flight of fancy but rather a gritty, grimy and quite often, an in your face epic. Melodrama just stays the right side of over-the-top the love triangle between Pang, Lian and Erhu played surprisingly human and bittersweet. Peter Chan makes an effective move to big epic filmmaking, framing ‘The Warlords’ in a dusty, dirty setting that evokes realism, even when proceedings are on a grand scale. However, Jet Li is the real star here. Just when you think he is resting on his laurels and content with making crappy Hollywood films (‘War’, ‘The Mummy 3’) and that he may just be done with this whole acting business he comes right back and reminds you why he is one of Asia’s biggest stars. For the lack of a better word, he is mesmerising as the conflicted Pang, a man who is essentially good but seems to do some very bad things in order to be good. While Lau and Xu are also especially good, it’s Li that carries the movie and not just in the battle scenes. He once again shows (much like he did in ‘Danny The Dog’ and ‘Fearless’) he is an actor as well as a martial artist and this is one of his best roles. A meaty character to sink his teeth into and Li wisely refrains from grandstanding making sure we are always engaged with the character no matter the horrific acts he sanctions.

Li is also adept in the big action scenes but don’t go expecting solo face-offs of martial arts mayhem. This is a war movie and the action/battles stay within this theme, never flashy but always brutal. Li does get a few show stopping scraps, not least his extended takedown of dozens of enemy soldiers, but the action is on a large scale and brutally realized. Limbs are severed, soldiers beaten while lying on the ground and the horses they ride don’t fare much better either. It’s savage stuff and lends itself well to the realism ‘The Warlords’ is striving for.

A great, big ballsy war movie, ‘The Warlords’ may not always be subtle but it is never pretentious. Li commands the screen like his character commands his army and while the film has it fair share of savagery, ‘The Warlords’ still manages to be a touching, personal and sometimes, even beautiful film.