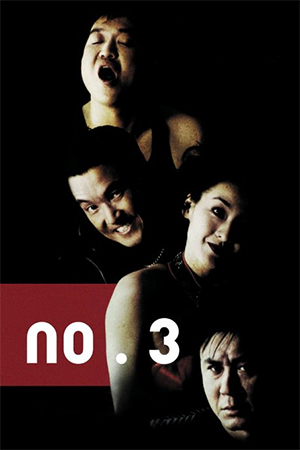 A rather unremarkable and unsatisfying debut from writer and director Song Neung-han, ‘No. 3’ is neither as funny as it thinks it is or as hip and entertaining as it wants to be. Tae-joo (Han Suk-kyu) is your average low level gangster who wants to rise through the ranks. This he does and graduates to the rank of number 3 but like all tough talking gangsters, he still aspires to be number 1. However, his quest to become top dog is hindered by a surfeit of uninteresting characters that clog up much of the film’s running time. These include dodgy cop Dong-pal (Choi Min-sik) who does nothing more than gets angry, has a pointless fight with the leading man and is a completely uninteresting character; Tae-joo’s put upon wife (Lee Mi-yeon) who embarks on some bizarre love affair with a wannabe poet that does provide some laughs but feels like it should be part of some silly romantic comedy rather than a gangster film; and Jo-pil (the great Song Kang-ho from ‘The Host’ and ‘The Good, The Bad and The Weird’) who plays an inept assassin attempting to train a group of protégé’s but fails miserably at every attempt. To be fair, his storyline does provide much of the entertainment the film offers but it’s a sub plot that simply seems to be there for the sake of having another sub plot.

Some may find ‘No. 3’ a somewhat funny and clever deconstruction of the typical gangster film but it really is just a muddled mess: too many characters, who aren’t that interesting to begin with, all given very little to do. Even a fairly novel character by the name of Ashtray (who uses the titular ash collecting device to pummel people to death) can’t liven the film up enough, not even in some fairly brutal and knuckle dusting fight scenes. This is the other problem: the tone. The film switches back and forth from broad black comedy (so broad, there are few laughs) to violent gangster thriller so quickly it’s often hard to follow what is going on. The narrative meanders all over the place, the characters become more unlikeable and tedious as the flick progresses and everything just feels dragged out. Even Song Neung-han’s attempts to jazz things up with some admittedly cool photography and editing tricks also feel stale and lame.

The acting isn’t half as bad and there are some good ideas but the whole thing just lacks focus. Song Neung-han has at least attempted to do something different with a tired genre (and way back in 1997 as well) but rather than turning the gangster convention on its head, or being a clever satire of gangster posing, it feels as if the director got bored of the concept and just threw a bunch of unconnected ideas and uninteresting characters together. Maybe it’s just the gangster genre that is tired and one can only do so much with it, but with a cast that includes ‘Oldboy’s Choi Min-sik, ‘The Host’s Song Kang-ho and ‘Tell Me Something’s Han Suk-kyu, ‘No. 3’ should have been a lot better. Still not every gangster film can be great and while it tries hard and it’s interesting to see the aforementioned actors in earlier roles, ‘No. 3’ just doesn’t offer anything new or exciting. Shame.