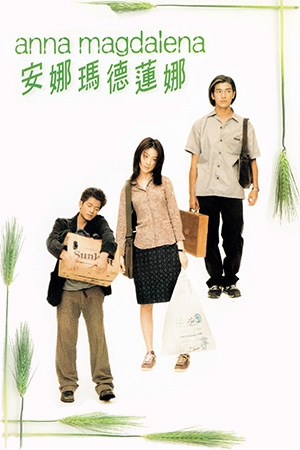 The romantic drama is a genre that has been mined by film directors for countless years and in just about every film industry on earth. However, although ‘Anna Magdalena’ fits into this category, it is unlikely that the casual viewer would have seen anything like this. Quite simply put, this is one of the most moving and beautifully crafted films to come out of Hong Kong.

Takeshi Kaneshiro plays a quiet, mild-mannered piano-tuner who ambles his way through life without much in the way of emotional fulfilment. Into his life enters Aaron Kwok – the complete antithesis of Kaneshiro – an aspiring writer who treats the countless women who fall at his feet with little care. The shallow, yet certainly charming Kwok moves in with Kaneshiro and the two opposites continue their varying lives. The empty life of Kaneshiro is suddenly shattered by the appearance of the headstrong yet beautiful Kelly Chen who immediately sets about annoying Kwok with her terrible piano playing. The timid piano-tuner quickly falls in love with Chen, but knows that, even though they started out as enemies, Kwok and Chen are bound to end up together. Thus it happens and once more Kaneshiro sees how women always go for the man who’ll do them the least good.

If this sounds like a typical story of unresolved love, be prepared for the final quarter of the film. With Kwok having left Chen and with her heart broken, Kaneshiro tries his hand at writing and sends his efforts to local publishers (cameos by Leslie Cheung and Anita Yuen). The screen is then filled with his vision of a distant romance between two orphans known as X and O with Kaneshiro and Chen taking the roles. These two adventurers take on the task of finding the long-lost love of a mysterious man whose gold they find and along the way discover their love for each other.

Putting this film down in writing hardly begins to do justice to the sheer beauty and resonance of ‘Anna Magdalena’. It demands an audience and will leave a real impression on those who like to try different kinds of Hong Kong films. The structure of the film is built around Bach’s Anna Magdalena suite with the narrative being broken into four ‘movements’ : 1/ Takeshi Kaneshiro’s introduction 2/ Aaron Kwok’s effect on his life 3/ Kelly Chen’s effect on their lives 4/ Kaneshiro’s literary vision of love. This construction is very effective.

It would be easy to write a small essay on what makes ‘Anna Magdalena’ such a cinematic joy. The cast are all first-rate with Takeshi Kaneshiro putting in the performance of a lifetime. His vulnerable and touching characterisation will strike a chord with many viewers. Kwok is landed with a somewhat unsympathetic character, but breathes charm and boyish energy into the part. Alongside Kwok, Kelly Chen often seems to come in for criticism for her cold demeanour, but ‘Anna Magdalena’ managed to silence many critics.

Cinematographer Peter Pao has received constant plaudits for his flawless work on films such as ‘Bride With White Hair’ and ‘Anna Magdalena’ shows him at his apex. His use of lighting is simply enchanting and creates an enveloping atmosphere. Director Yee Chung-Man combines the conventions of commercial film-making with the subtlety of art-house cinema, but never loses the main heart of the film.

If you haven’t got the message yet: SEE THIS FILM!