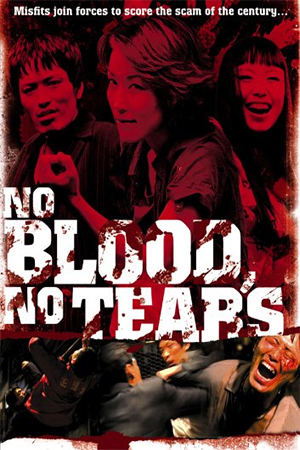 Ryoo Seung-Wan, the director behind Korean hits ‘Arahan’, ‘Crying Fist’ and ‘City of Violence’, first made a real splash with this gritty, grimy, tough-as-nails crime drama. Equal parts drama, black comedy and hard hitting action, ‘No Blood No Tears’ really does, and to coin a well worn phrase, pull no punches. In your face violence, brutality towards women and the “B” word used frequently whenever a woman is on screen, ‘No Blood No Tears’ isn’t for those who balk at anything remotely un-PC. Lee Hye-Young and Jeon Do-Yeon play two down trodden women; Young a former gangster now working as a taxi driver trying to pay off her debts to her former ‘employees’; Yeon the trophy girlfriend of a once promising boxer, now an increasingly violent gangster directing most of his rage at her. When a big score comes up the two women, after much consideration and beatings, decide to team up and rip off Yeon’s boyfriend, Young’s gangster buddies and pretty much everyone else in the flick. But as is always the case with any hip and edgy film, things do not go accordingly to plan and the violent fall out pushes the women to breaking point.

Now as hip and edgy as ‘No Blood No Tears’ might be (cool characters, snappy dialogue, lots of groovy freeze frames) it doesn’t mean its missing a soul. Unfairly compared to the Tarantino’s and Ritchie’s of this world, ‘No Blood No Tears’ always puts character before coolness. Yeah, there is a lot of whiz bang editing, split screens and toe-tapping music but director Ryoo Seung-Wan doesn’t let this overshadow his cast. The leading women are literally put the emotional and physical ringers and they engage as two characters who are trying to claw their way to a better life, by any means necessary. Pretty much every man they meet or are involved with either beats, berates and or does both to them (though there is a slight shining light for the male species, when a group of dudes step in to help one of the ladies when she is being beaten). However, rather than a melodramatic diatribe against how shit men are, ‘No Blood No Tears’ rather shows the nasty side of male gangsters, people who really don’t care for anyone but themselves. The violence against women may put some viewers off but it is never exploitative (though occasionally you do wish they would give it a rest) and the women do eventually give back as good as they get and are always the ones who come off as the smarter, stronger species. But be warned, the violence is often flinching and despite the odd touch of black comedy, this isn’t some ‘mockney, let’s have a laugh’ gangster flick.

Being the director of action fair such as ‘Arahan’ and ‘City of Violence’, Ryoo Seung-Wan stills crafts some knuckle dusting fights scenes to pepper the drama not least a blistering fight between two of the leading men. No gimmicks, no wires and no gags, just rough and tough fighting at its fist flying best. Not to say ‘No Blood No Tears’ is strictly an action film, more a tough gangster drama with some blistering action mixed in. The women protagonists make for a refreshing narrative change and are never shown as damsels in distress or whiny female sidekick stereotypes. ‘No Blood No Tears’ may not be a film for all tastes, not least due its violent nature towards women and the slightly laid-back pace (a good ten minutes could have been shaved off) but it is a challenging and rewarding film as well as an entertaining one. For those looking for gangster/action slightly of the beaten track, ‘No Blood No Tears’ is a good start.