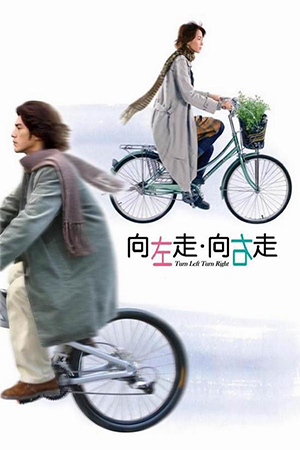 Yet another electric year for Johnnie To and Wai Ka Fai’s ‘Milkway Productions’ saw the release of such diverse features as ‘Love For All Seasons’, ‘Running On Karma’ and this splendid production. An adaptation of Jimmy Liao’s graphic novel, ‘Turn Left, Turn Right’ is one of the most delightful and genuinely disarming productions to have come out of Hong Kong in the past few years.

Set in Tai Pei, ‘Turn Left, Turn Right’ follows the story of aspiring violinist John (Kaneshiro) and shy translator Eve (Leung). The two go about their daily lives blissfully unaware that they live next door and only meet accidentally in the park one day. As their meeting progresses, both of them realise that they have met previously; a long journey on the train saw their two respective schools meeting and John and Eve slowly falling for each other. Unfortunately, neither of them knew the other’s name and so they have drifted apart until this fateful day. Determined to stay with their soulmate, John and Eve exchange numbers and resolve to meet again for another date soon. Yet again though, a cruel twist means that both of them lose contact and are frustrated that they have no obvious means of meeting again. Broken-hearted, John and Eve try desperately to find the other in Tai Pai and, ironically, the incidents that occur along the way are almost identical. To add further stress to the situation, John and Eve are then the respective subjects of unwanted affection: John is ‘stalked’ by a feisty young woman who works at the local fast food outlet while Eve is targeted by an amorous doctor who she went to college with. The search continues despite these obstacles, though things continue to look bleak for the young lovers ever meeting again.

On the surface, ‘Turn Left, Turn Right’ is a romantic comedy that is too preposterous and reliant on coincidence to succeed. The idea that two people could live next door for so long and be so determined to find each other without ever casually bumping into one another is difficult to swallow. However, to try to examine it with this line of thought is futile as much of the winning charm of the story is reliant on a feint touch of surrealism. The intention is to carve out a simple tale about the frustrations of meeting that someone special and in this area Johnnie To and Wai Ka Fai succeed with laudable aplomb.

The general premise of ‘Turn Left, Turn Right’ is given life by its sublime set of characters and, of course, the gifted performers behind them. John and Eve are an affectionate and thoroughly winsome couple of lovers, full of subtle inadequacies and quirks, yet always believable. Characters who are slightly nervy and, to some, neurotic are very difficult to write as the audience can often feel slightly bored by any overuse of ‘kookiness’. John and Eve manage to avoid any of these difficulties and the results make ‘Turn Left, Turn Right’ the achievement it is. Beyond our heroes we can also savour two amusing supporting players who add a zestful energy to the storyline. Not only is the actual characterisation superior, but the performances are especially noteworthy. Takeshi Kaneshiro has rarely been as fascinating as he is here; his performance is similar to the one he gave in ‘Anna Magdalena’, full of nuances that make him a very sympathetic individual. Gigi Leung also shines as Eve, managing to radiate vulnerability with a radiant beauty that she has only briefly succeeded in combining before.

‘Turn Left, Turn Right’ makes good use of its relatively exotic setting, utilising luscious photography and a pleasing use of its Tai Pei setting. The obvious fact that the narrative takes place away from the usual Hong Kong city landscapes gives everything a fresh feel that undoubtedly adds to the overall energy of Johnnie To/Wai Ka Fai’s stellar efforts. There’s also some sweeping crane shots to admire; these aesthetic strengths are further indications that this is a production that oozes quality and sophistication. ‘Turn Left, Turn Right’ excels in most departments and it’s always comforting to see such care and attention taken in front of and behind the camera.

In the final analysis, ‘Turn Left, Turn Right’ is a minor miracle. It’s difficult to avoid over-gushing praise, but this is a sweet, enchanting romantic comedy that has enough moments of genuine empathy to fill a dozen lesser films. In an age where ‘sweet film’ has almost become a derogatory term, ‘Turn Left, Turn Right’ is a cinematic joy that is touching, amusing and uplifting. Any film that can combine all of these virtues is worthy of praise – it’s no surprise then that I have given this gem the highest mark I can bestow.