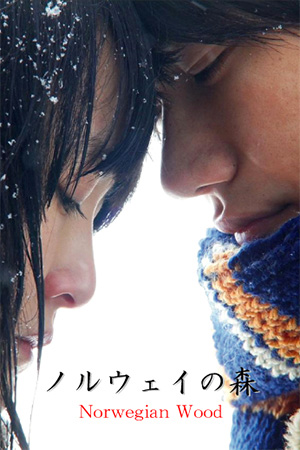 Renowned director Tran Anh Hung (‘The Scent of Green Papaya’, ‘I Come with the Rain’) brings Japanese author Haruki Murakami’s, arguably, most famous novel to the screen with a hefty weight of expectation. Murakami is a world famous author and Norwegian Wood is considered his masterpiece (I would say that honour is reserved for ‘The Wind Up Bird Chronicle’) and adapting this book to film (a book that could be considered un-filmable) is a risky proposition. Murakami himself has been reluctant and protective of allowing his work to be adapted for the screen. However, and enough with the overblown expectation waffle, ‘Norwegian Wood’ has perhaps found a good fit for becoming a film in Tran Anh Hung. His film version isn’t quite perfect and unfortunately pales compared to the novel but it is far from disrespectful to the source material and is a better version than many may have expected.

Both sweet and sorrowful, ‘Norwegian Wood’ tells the story of Watanabe (Matsuyama), a student on the cusp of his twenties, and the relationships he forms with several women over the course of a year at the end of the 1960s. He is in love with his good friend’s, Kizuki, girlfriend Naoko (Kikuchi). When Kizuki commits suicide Watanabe and Naoko strike up a romantic relationship, which is soon jeopardised when Naoko’s mental health takes a turn for the worse. Struggling to deal with who she is and the notion of intimacy she ventures to a remote facility to seek therapy and understanding. Watanabe then strikes up a relationship with Midori (Mizuhara), a girl who completely falls for Watanabe. He also has feelings for Midori but is completely devoted to Naoko and over the course of several months the three try to come to terms with love, sex, relationships and their own identities as they take their first awkward steps into adulthood.

I guess one’s enjoyment of ‘Norwegian Wood’ really depends on one’s fondness for Murakami’s novels and Tran Anh Hung’s cinema. If you are not a fan of either then you are unlikely to be a fan of this film as with its own particular style, mood and view of relationships the flick could certainly be accused of slipping into navel gazing and outright pretentiousness. Which, on occasion, it certainly does, as the story and relationships it explores are drawn out. The narrative’s lack of haste to get anywhere or say anything may also frustrate some and, no doubt, those who are avid fans of the book will be disappointed that, well, this isn’t quite the book.

But, as an avid fan of the book and Murakami’s work, Tran Anh Hung’s interpretation is a respectful one, a fiercely acted one and possibly the closest we’ll get to a decent adaptation of the book. The mood, sense of unease, sense of loss, sorrow and beauty are perfectly captured by Tran Anh Hung’s camera, choice of music and a wonderful cast, meaning the film often comes close to replicating the atmosphere of the book. The cast really are impressive and make this much more than young twenty something’s just being angsty. Issues such as intimacy, identity and the nature of relationships are handled with care and realism, so much so that proceedings reach such a crescendo of sadness that even the most black of heart will have trouble not feeling for the eternally troubled Naoko. Rinko Kikuchi (Babel) has a lot to do with this (through her brave performance) ensuring the character of Naoko is very much a real person no matter how overdramatic her actions become.

With Tran Anh Hung’s knack for sumptuous photography, a wonderful score by ‘Radiohead’s Jonny Greenwood and an overpowering sense of youthful lost love ‘Norwegian Wood’ is often beautiful and heartbreaking if a little frustrating. Much like when one first falls in love. Give it a chance.