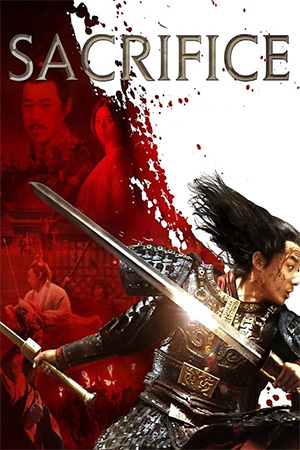 Favoured by the court and related directly to the King, the Zhao family are a powerful force within the kingdom. General Yuan (Wang Xue Qi) is intensely jealous of their standing and begins to construct a plan to frame them for the murder of the king and use this as an excuse for a kingdom-wide ethnic cleansing. With the help of a conniving court eunuch, Yuan manages to achieve his goal and, stepping into the power void, closes the city gates to make sure none of the Zhaos live. The massacre wipes out all but one of the clan – the newly-born son of General Zhao is helped to escape by the trusted family doctor, Cheng Ying. Yet to preserve his life, Cheng must make a sacrifice that all parents dread as his own newborn son is thought to be the last Zhao baby and killed along with the doctor’s wife.

As General Yuan consolidates his position as the real power of the kingdom – a young puppet king merely in place as a figurehead – Cheng Ying raises the last Zhao and plots to use him to get revenge when he is old enough. The doctor has a further idea for vengeance though: the only way Yuan can feel the pain that he has had to endure is to be killed by someone he considers to be as close as family. To this end he inveigles the general into accepting the boy as a pupil and nurtures the bond between the two until they become as father and son. Their closeness, however, threatens the whole plan as the Zhao boy grows up with a dogged loyalty to Yuan, unaware of the bloody history both of them share.

One of China’s most revered directors, Chen Kaige, tentatively dips his toes into the historical drama genre again after the critically-mauled ‘The Promise’. Whereas his last foray verged on the phantasmagorical, ‘Sacrifice’ is grounded in the earthy world of court subterfuge and political chicanery. This juxtaposition of opulent pageantry and ugly avarice clearly marks itself against films of ‘The Promise’ and its ilk and it proves to be a world more suited to Chen Kaige’s critical eye than the previous epic.

Based on the classic Yuan dynasty play ‘The Orphan of Zhao’, Western viewers may immediately think ‘Shakespeare’ as the film progresses, but obviously the story is at least couple of centuries older than ‘Hamlet’. Nevertheless, the drama of betrayal and the ripe emotions of those caught up in the riptide of the struggle for power would not look out of place in the Bard’s canon. Emotions run high, drama reaches intense peaks and actors are given meaty material to devour. These virtues gives Chen Kaige a more familiar terrain and one that his well-attuned style exploits expertly. The few moments of sword-clashing and sabre-rattling are resplendent, but it is the dramatic content and the sacrifice of the title that is the focal point.

‘Sacrifice’ does occasionally fall prey to melodrama. The first half in particular has a few too many scenes where the emotional threshold is elevated beyond a natural level. Meanwhile the finale has the opposite problem, the confrontation that had been building up for two hours ending in bathos. It’s these fluctuations in high drama that distances the viewer somewhat, but the compensation is two excellent lead performances. Ultimately, ‘Sacrifice’ is not going to find itself among Chen Kaige’s most revered films, yet it is still a classy almost operatic historical film that holds the attention.