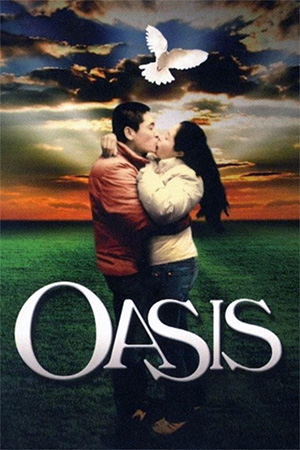 Films don’t come much rawer than or as emotionally challenging as ‘Oasis’. As close to documentary like filmmaking as you can get, without it actually being a documentary, and mercifully jettisoning all pretensions of being indie for the sake of being indie, ‘Oasis’ walks a fine line between shock and tenderness. A love story at heart the film attempts to (and often succeeds at) pushing us out of our comfort zone and challenges our perceptions of love, isolation and what it means to truly care about someone. While there are some questionable motives in Lee Chang-dong’s film and the last act fumbles a little with an unrelenting need to make everything go wrong, one will be hard pushed to find a purer piece of cinema.

The central story is between Jong-hu (Kyung-gu) and Gong-ju (So-ri), two individuals deemed social misfits by all the “normal” people around them. Jong-hu has a slight mental capacity rendering him socially inept and shunned by his family. Gong-ju is also shunned by her family due to her cerebral palsy, left to live a lonely existence in her tiny apartment. They meet by chance and after a fraught first encounter, form a friendship where they give one another the closeness and friendship they each crave. But as is often the case in life and mostly due to Jong-hu’s social ineptness (and no doubt the need of the filmmakers to make the film as bleak as possible) their little piece of solace soon begins to unravel.

Never taking the easy route, Lee Chang-dong (‘Green Fish’) pushes boundaries by showing us a relationship between two people many may not think could exist. The relationship between Jong-hu and Gong-ju, despite her physical disability and his inability to always differentiate between right and wrong, is that of any “regular” couple. Well, as “regular” as any couple or person can be. But the two of them are never seen as regular, instead as people who should be hid away, not left to live their lives as they want. Chang-dong Lee certainly goes to great lengths to represent how “normal” people (those without disabilities and social incapability) are the real “monsters.” He perhaps lays it on a big thick, as pretty much every character other than the leads is, well, a complete shit. This is probably true in most circumstances but the point is perhaps laboured a bit much. But then again, perhaps not, as the character of Jong-hu is not completely innocent and this is where Lee Chang-dong’s film really succeeds.

Never fully taking side with either the protagonists or the people who shun them, the film also makes a case for Jong-hu causing some of the problems the two face. Often hinted at, he may be doing this for his own selfish reasons to get back at his unloving family and despite all the great things he does for Gong-ju there are some instances when maybe he should hold back as (unfortunately) the two can’t be as free as they would like. Inevitably this causes problems. Or is it society that has created this view and Jong-hu is simply and quite rightly doing all the things “normal” people are allowed to do? Again, ‘Oasis’ pushes us to face this question and asks the viewer to ask themselves what they would do in a similar situation. Perhaps, the toughest aspect of ‘Oasis’ is the basis of Jong-hu and Gong-ju’s relationship. Initially he attempts to rape her. Despite the horrificness of the act, Gong-ju invites him back to her place and the two then form a tender and blossoming relationship. It’s a tough aspect some viewers may not recover from and once again show’s the director pushing the boundaries of what is deemed acceptable (pushing too hard?).

However, the heart of ‘Oasis’ is the relationship the two form. Real, adult and at times unbelievably moving, it often comes as close to what real love, or at least companionship, is. Or is meant to be. With undeniable chemistry and trust, the two leads throw themselves into their parts with such natural skill: no grandstanding, no showy tricks, just complete immersion. While both are amazing, it’s So-ri who is so memorable. In fact, and excuse the hyperbole, it’s one of the best and most natural performances this reviewer has ever seen. Her depiction of cerebral palsy is so convincing it’s only when her character has several day dream sequences where she imagines what it’s like to be “normal” that we realize So-ri herself doesn’t actually suffer from cerebral palsy. An incredible performance.

Despite the often tough nature of the film, the unrelenting bleakness of the final third and some questionable plot devices, ‘Oasis’ is a film (unless you are completely black of heart) that stirs the soul. Will, hopefully, stick with you for days afterwards as you to try to figure out how it actually made you feel and if it doesn’t sound appealing, at least see it for So-ri Moon’s amazing performance.