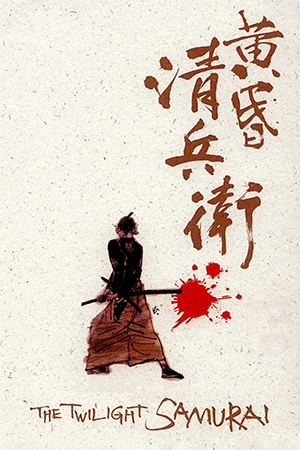 Seibei Iguchi, cruelly labelled ‘Twilight Seibei’ by his colleagues due to his reclusive behaviour, leads a quiet life with his two daughters and senile mother. Having recently lost his wife to illness, Seibei finds the balance between working father and family provider hard to maintain. His debts mount and his general appearance becomes that of an unkempt beggar rather than the noble samurai that his fellow workers aspire to. Though his wealthy uncle tries to marry Seibei off to an arranged wife, the widower refuses to disgrace the memory of his wife with such a decision and continues resolutely despite the harsh financial realties of his life. His life is drastically altered when his former childhood sweetheart, Tomoe, returns to town after divorcing her brutish ex-husband and quickly wins over the affections of Seibei’s children. Tomoe helps to care for Seibei’s two daughters while also tending after his senile mother while he goes out to earn his meagre wage. Unfortunately Tomoe’s ex-husband Koda tracks down his frightened wife and eibei is forced to protect her from the ogre. In an ensuing duel, the dishevelled swordsman surprises everyone by soundly beating his opponent while upholding his customary dignity. The news of Seibei’s exceptional skills begins to spread and he finds himself a minor celebrity because of it. Such fame has its price, though, and Seibei is given an ultimatum when his clan disintegrates around him.

Nominated for an Academy Award and sweeping the board at the Japanese equivalent of ‘The Oscars’, Yoji Yamada’s lyrically, tenderly woven tale of dignity is a triumph of substance over action. Yamada has taken the principles of the classic chanbara narrative and mixed it beautifully with the story by Shuuhei Fujisawa while also drawing on the style of the Hollywood Western. Such a blend as been used before, but rarely is an audience treated to such a confident handling of such diversely thematic material.

It’s easy to compare the character of Seibei Iguchi to the archetypal stoic hero of the classic Westerns, keen as he is no to fight or cause disturbance. However, the characterisation is far deeper and more involving than such a simple comparison would indicate. Seibei is primarily a family man, a proud father who works endlessly to provide for his beloved daughters while also caring for his elderly mother. The kind of issues his character is forced to deal with – i.e. bereavement, providing for his family – are far more resonant to the 21st century viewer than the standard samurai stereotype. While Seibei’s colleagues look to material things and ambitions to bring them happiness, the taciturn hero is focused purely on his family and how he can provide them with emotional support. It’s truly endearing to see such a character painted with the kind of subtle dignity he richly deserves.

Yamada can be applauded for generating an atmosphere of warmth for the homely hero. The viewer is given ample opportunity to see Seibei interact with his daughters, therefore helping the obvious bond between them and the sacrifices the father needs to make ultimately sympathetic. Although Yamada’s direction does verge on the ponderous in some scenes – especially the middle section of the narrative – it is nevertheless a key feature in ‘The Twilight Samurai’s enviable plaudits. The casting of Japanese action cinema legend Hiroyuki Sanada is certainly worthy of mention as he makes Seibei Iguchi a character that the audience not only believes in, but also can relate to on some level. With eyes humbly focused on the ground and his demeanour appearing almost apologetic, Sanada gives subtle indications of his hidden depths and gentle nature.

Naturally Sanada is the star who has perhaps garnered the most attention for the film, but the supporting players are vital to the confident nature of the production. Miyazawa is excellent as Tomoe and scene where she meets Seibei before his closing duel is a massive credit to both performers. Tomoe comes across as a loving potential wife for Seibei and Yamada makes this whole story thread fully engrossing. This subtle romance is the kind of delicate statement that Eastern cinema does so well – all Western film-makers should pay attention to how beautifully this is handled.

‘The Twilight Samurai’ is a film that richly deserves the critical response it has received. Recalling the meticulous control that Kurosawa displayed in his accomplished work, Yamada creates a work that will appeal to a number of people who may not have usually been attracted to the genre. True, the pacing does miss a step in certain sections of the film and the final voice-over may seem slightly unnecessary, but this is a production that has been made with much care and attention. The result is a 21st century samurai film that is mature while never lauding its superiority over the audience. With a welcome lack of pretension but a refreshing inclusion of humanity, ‘The Twilight Samurai’ is highly recommended.