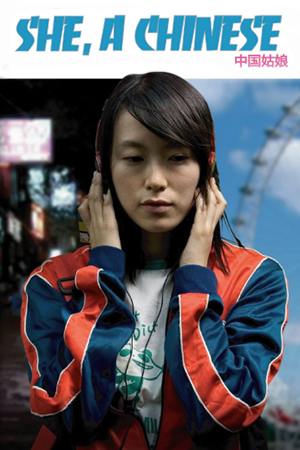 Li Mei (Huang) lives an uneventful life in a small provincial Chinese village where she is constantly berated by her overbearing mother. Idling away her time at the local noodle bar, Mei strikes up friendships/relationships with several of the neighbourhood men, one a local truck driver and the other a cool young guy who has made a bit of cash in the city and is now back in town acting all flash. Mei soon becomes bored of the flash guy (more interested in his Ipod!) and when the truck driver forces himself on her and rapes Mei, she decides it’s time to leave for pastures new. Heading to the city, she finds work in a love salon and soon begins a relationship with a local gangster. But when that ends in tragedy she heads to London (a place she’s been longing to escape to) in search of a better life. But struggle and more troubled relationships ensue as the young woman soon learns life is just as hard in a big foreign city as it is in her tiny home town.

Author, and now film director, Guo Xiaolu’s ‘She, A Chinese’ is an indie film through and through, sometimes so much its detrimental to the overall enjoyment of the film. The quest of a young woman in search of herself amongst the ever opposing environment she finds herself in is hardly fresh and while the intentions of the makers are commendable the film suffers from a heroine who is hard to warm to and the ease with which she flits from one drama to the next. Now Li Mei (ably played by Huang Lu) certainly has a tough time and the violence she encounters is startling but as the film continues the number of unconnected escapades and relationships she finds herself in, which she picks up and drops at will, becomes wearisome rather than insightful. She may be meandering through life not knowing what she is looking for but the meandering tone of the film becomes tiresome, that by the time she comes to her umpteenth failed adventure/relationship credibility is well and truly stretched. All of this would be fine if the film wasn’t presenting itself as such a serious effort, right down to its minimalist style, low-fi camerawork and matter-of-fact portrayals of sex and violence.

No downtrodden cliché is left unturned and it gets to the point where all the principals feel more like caricatures of real people, all placed at opportune moments for our protagonist to encounter. However, there are still parts of the film that work. While she isn’t always a sympathetic character (and perhaps isn’t always meant to be) Huang Lu does infuse Li Mei with some compassion making her a resilient character that keeps going no matter what happens to her. It’s also a brave performance by Huang considering what her character has to go through. The film arguably works better in the first half set in China, particularly the segment where Mei shacks up with beats-up-people-for-money Spikey (Wei Yi Bo), but by the time Mei’s plight reaches London narrative coincidence and the mantra of “life is tough” starts to exhaust proceedings. Director Guo Xiaolu does manage some scenes of striking realism where the drama and relationships work but soap opera theatrics derails the overall dramatic impact of ‘She, A Chinese’.