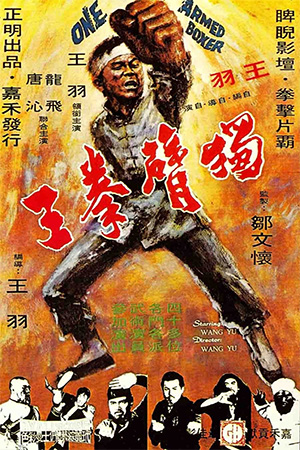 Much welcome Blu-ray release of the seminal 70s kung fu flick that was one of several films that put Jimmy Wang Yu on the movie martial arts map. Still as crazy and brutal as it was when originally released all those decades ago, ‘One-Armed Boxer’ sees Wang Yu stars as Yu Tien-Lung, a top fight master who crosses the path of a notorious gang leader when he tries to stop him and his cronies hassling some locals. Soon Yu Tien-Lung finds himself, along with his martial arts school, targeted by the gang leader and his array of gifted fighters which sees them all square off in an epic fight which leads to Yu Tien-Lung losing one of his arms! Now he must train himself to fight one-armed to exact revenge.

‘One-Armed Boxer’, while a little rough around the edges, has lost none of its crazy energy and still packs an almighty bloody punch with its almost non-stop 90 minutes of martial arts fight action. The story may be flimsy (basically two martial arts schools facing off against one other with a variety of fighting styles!), it may take over half the film for Wang Yu to actually become the One-Armed Boxer, and it’s about as subtle as a flying-kick to the face but Wang Yu’s directorial breakthrough has lost none of its wild impact. Essentially wall-to-wall fight action (from a time when fight/action flicks were happy to cram their running time with just action: halcyon days!), ‘One-Armed Boxer’ rarely lets up in its quest to feature as many fighting styles as possible and dole-out violent revenge. Proceedings start off a little rough and ready with lots of fighters jumping around constantly to then become more focused in a bravura sequence that sees the two fighting clans pitting their fighters against one another as the likes of Tibetan monks, Thai kickboxers, and Indian Yoga experts battle for supremacy.

It’s a jaw-droppingly sustained sequence of varying styles, creative choreography and brutality featuring the still WTF moment when Wang Yu loses his arm! In fact, it’s so wild, bloody and fight packed the film (while still featuring tons of action post this sequence) can’t quite equal the pure fight radness of it. Wang Yu packs on the blood as much as the various fight styles and while the fighting may not be as fluid or intricate as later/modern fight films there is no doubting the talent and energy involved. There’s little meat between all the sweet fighting: in fact, there’s so little that even the beloved training montage of this genre gets truncated and whizzed through by merely showing some stills of Yu Tien-Lung recovering and training (with a little music overlaid) thus, to get back to all the fighting quicker!

Certain stylings and characterization are somewhat dated but creativity and the sheer volume of great fight action shine through and with Eureka Classics new cleaned up Blu-ray the film has never looked better or more gleefully blood soaked.