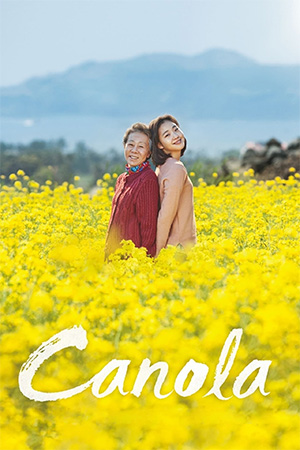 Hard working Jeju island native Gye-choon dotes on the grand-daughter she raises in the absence of her parents. During one normal trip to the market, Gye-choon loses sight of her grand-daughter, Hye-Ji, and in the ensuing confusion, the young girl disappears. Gye-choon spends years trying to find Hye-Ji and is determined to find out who abducted her, but no clues appear and the search appears fruitless. However, after twelve years have passed on from the original incident, Gye-choon is confronted by a teenager claiming to be Hye-Ji. She is naturally over-joyed and Hye-Ji slips back into a loving life with her grand-mother and friends after years spent in Seoul’s underbelly. Yet not all is as it seems and Gye-choon is confronted with a potentially devastating twist.

Part mystery, part emotional drama, ‘Canola’ is Korean film-making at its best. Sentimental, yet never schmaltzy, inspiring though certainly not preachy, ‘Canola’ strikes a beautiful balance between its elements that makes for a hugely admirable whole. Korean films have occasionally tried to tread this ground before rather clumsily, mistaking histrionics for the very deeply affecting. ‘Canola’, though, is the kind of production that re-addresses the balance with aplomb.

‘Canola’ succeeds where other similar films fail because it gets its tone just right from the first few frames. It creates a realism that involves the audience, but doesn’t allow it to become the over-emphasised privation that lesser films would use to enforce the point – the characters are emotionally distraught in obvious ways without the need to use blunt scenes or hammy music cues to beat home the point. Some might think that this makes the world of ‘Canola’ superficial: it does the opposite though. It allows subtlety to rule over the easier option of thumping opera.

Moving and uplifting, ‘Canola’ takes a common storyline and turns it into something special. Highly recommended.