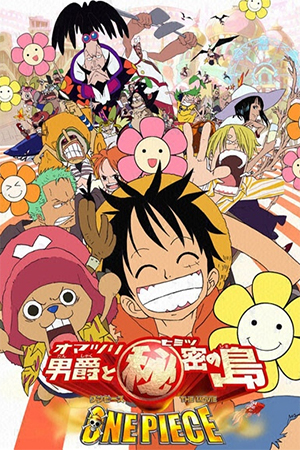 When the Straw Hat pirates get their hands on a flyer advertising “Festival Island”, they decide to make a detour and get some well deserved R and R. Upon arrival, the island seems strangely deserted but the silence is soon broken by the appearance of the flamboyant Baron Omatsuri and his entourage. According to the Baron, the Straw Hats will not be permitted to enjoy the luxuries of the island until they participate in his “hellish” challenges. Although the team are understandably reluctant, Luffy is over the moon and immediately accepts. Little does he realise though, that these events could very well divide the feelings of the crew and may even spell the end of the Straw Hat pirates as we know them.

The first and most instantly noticeable trait of this sixth ‘One Piece’ movie is the obvious change in artwork. Taking on a raw and almost sketch-like style, it’s a very bold departure from the previous outings and one that takes a little bit of getting used to. However, once you get past the initial shock, you do realise that this is a very positive move forward as it provides a more adult perspective on the characters and exhibits an artistic edge that I would say has gone a long way to influencing the current design of the show.

As for the story, I initially felt that it was a little too overly familiar and expected it to play out exactly like the “Davy Back Fight” arc (a filler-esque section of the series where the straw hats are forced to compete in a variety of wacky competitions). Luckily though, the simple idea is just a stepping-stone towards developing a very emotional plotline that centres on the bonds of friendship. This particular theme has always been very well represented within ‘One Piece’ and this cinematic outing successfully manages to replicate the uncanny ease with which it shifts from high-class comedy to heart-warming displays of sentiment. This is especially true for the gripping finale, which finds Luffy on the verge of giving up as he truly believes he has failed his friends.

Unfortunately, all of these positives do come at something of a price as the film clearly suffers in the action department. While there are a few glimpses of the crew’s skills during the competition, it is always very obvious that the film lacks any actual one-on-ones. Now, I appreciate this is going to disappoint many fans of ‘One Piece’, but I will defend the decision as the story plays out in such a way that there really isn’t any call for it and the bad guys do still get a slap or two when necessary.

So, I guess the only question that really remains is where does this stand in my rankings for ‘One Piece’ movies? Being an action fan it is fair to say I was very aware of the lack of it, but at the same time this is easily overlooked when you consider the quality exhibited in the story department. Add to this some top notch comedic banter and some very stylish artwork, and I would say this could easily be considered the best outing so far… or maybe that’s part 4… or perhaps part 1… argh, just too many good movies!!