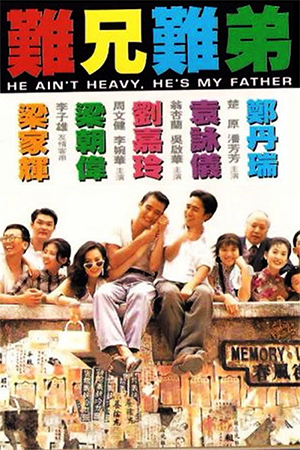 A U.F.O. production often provides something a little special in terms of atmosphere and execution. So strong is this identified with the studio that there appears to be a certain expectation that needs to be met by any film from this stable. Although it is, at a very basic level, a Hong Kong remake of ‘Back To The Future’, ‘He Ain’t Heavy, He’s My Father’ is reliant on this aforementioned charm and therefore stands alone as a film worthy of attention.

Tony Leung Chiu-Wai takes the lead role of a shallow and certainly far from sympathetic character who treats those around him with little respect. He excuses two-timing his girlfriend and his unpleasant treatment of his family by pointing to his own father (Tony Leung Ka-Fai) and blaming him for his shortcomings. With his own life in a mess and nothing to recommend it, the arrogant son is given a unique opportunity to change his life when, in a mystical twist, he is transported back in time to the 50s. Finding the calmer pace hard to adjust to, the time-traveller is befriended by a young man who proves to be his own father. Although the same attitude of self-pity continues to plague him, the visitor to town begins to realise what really made his father tick. This understanding is enhanced as he is drawn further into the magic of the town and its inhabitants – all as his future parents begin to romance each other. After aiding the lovers as they battle against her rich, disapproving father, the son comes to appreciate those important to him in his own life. It’s therefore inevitable that, by the time he manages to return to his own time, his character has changed sufficiently to adjust his life for the better.

The two Tony Leungs have very different screen personas on the whole, but here they make the perfect double-act as father and son. Leung Kar-Fei tends to be a larger-than-life performer – sometimes hamming things up – but ‘He Aint Heavy, He’s My Father’ gives him an opportunity to convey a number of emotions. The elderly version of his character has enough gravitas to be convincing while the younger is endearing enough to be sympathetic. Leung Chiu-Wai is often laid back and likeable; both of these traits are in evidence again here, though the latter takes some time to become apparent due to the nature of the character. The film doesn’t attempt to explain its incredible twist as was done in ‘Back To The Future’ which is perhaps why this pivotal moment pales into the background. Unfortunately not enough of the storyline’s potential is realised to be fully satisfying; such an intriguing plot needed a bit more attention to its effects instead of just skimming over the matter. The concept therefore fails to sustain interest throughout the running time, allowing too many slower moments to take over. These details drag the film down to the level of the good rather than great, but the chance to see the two Leungs together and a few well-directed magical moments make this a recommendation.