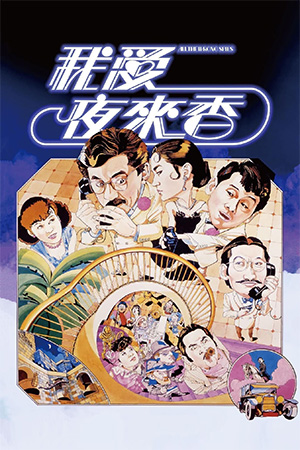 Considered a semi-sequel to Tsui Hark’s popular comedy spoof ‘All The Wrong Clues’, director Teddy Robin (one of the stars of the original) and writer Raymond Wong create this reasonably enjoyable follow-up ‘All The Wrong Spies’.

Whereas ‘All The Wrong Clues’ was a spoof of detective films and the like, this parody is focused on the spy genre. The familiar wartime intrigue films of the 30s and 40s are the main target of this scattershot comedy. It is the eve of World War II and Hong Kong private eye Yoyo (Lam) learns of a formula for a nuclear bomb that is up for auction. The formula is in the hands of a Jewish scientist, but Yoyo is given the chance to make sure that the plans are handed over to U.S. intelligence. For this mission, Yoyo employs the services of trusted friend Inspector Robin and together the pair investigate the whereabouts of the formula. This leads them into direct conflict with a corrupt police officer and a sneaky Japanese spy (Hark) who also has designs of gaining the information for his country. Yoyo, though, is more distracted by a beautiful addition to the chase (Lin) who is thrown into the blend due to her own motives.

Although considered a follow-up to ‘All The Wrong Clues’, ‘All The Wrong Spies’ deserves to be commended or criticised on its own. Of course, it’s loosely connected to Tsui Hark’s original hit and so there’s no reason to refer to it in this review. The first point that springs to mind about ‘All The Wrong Spies’, and indeed many other George Lam vehicles, is the lack of charisma shown by the leading man. Lam was very popular as a singer, but his screen presence is sorely lacking; when emotion is called for, Lam sticks to the single facial expression that his whole acting career is based on. This film merely concretes Lam’s deficiencies – whether the scene is dramatic, romantic or comic, George Lam remains painfully stoic.

Despite the weakness of its central performance, ‘All The Wrong Spies’ does incorporate the zest of the Cinema City films that dominated the early 80s. To many that might not be a good thing, but it does mean that the duration is mostly entertaining and succeeds in moving along with plenty of energy. The film also boasts some pleasant comic set-pieces while Brigitte Lin shines on the screen as she nearly always does. A good comedy, simple as that.