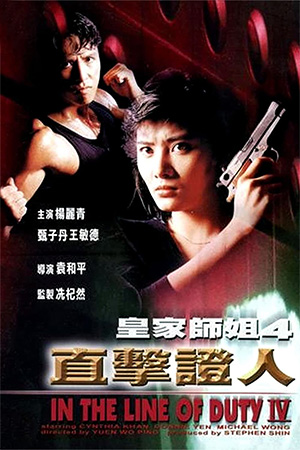 This is by far the best of the ‘In the Line of Duty’ series from D and B Films. Probably because it pairs the skill and ability of Donnie Yen with the inimitable choreography of Yuen Woo-Ping.

Donnie and Cynthia play detectives on a murder case under the supervision of Michael Wong, and are all used to the best of their abilities as the plot twists and turns between memorable, exciting fight sequences letting Donnie dish out the punishment from a motorbike while Cynthia gets her kicks on a moving ambulance (no stunt double there!), as well as the usual high power toe-to-toe action.

Michael Woods (‘Cheetah On Fire’, ‘Crystal Hunt’) again provides a worthy adversary for Yen, being more quick and flexible than you would expect a guy of his build to be. John Salvitti wins the award for most laughable performance, adopting ridiculous sunglasses (at night) while showing off some silly dance-like footwork, as well as his usual lightning kicks.

You really feel a lot of the hits in this film which is all in all, a hugely enjoyable action flick, jam-packed with trademark Woo Ping fight scenes, thankfully sans wires!