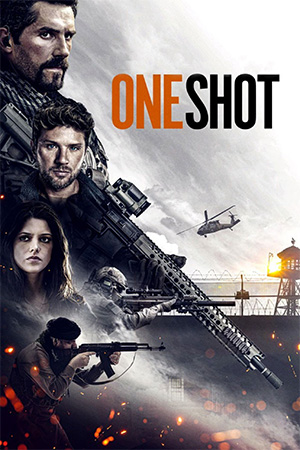 Jake Harris (Adkins) is the team leader of a squad of Navy Seals tasked with escorting a high value asset from a CIA black site island prison. During pick up of said asset, the site is attacked by a group of heavily armed insurgents, who will do whatever it costs to get to the asset. Thus, Jake and his team find themselves engaged in a battle of survival as they fight to stop the asset falling into enemy hands, while staying alive themselves.

Streamlined set-up is given extra credence by the much talked about (seemingly) single take the movie is shot in, giving the film a real sense of urgency and the action an extra dose of tension. While the single take approach can sometimes come off as gimmicky (and it now seems almost every modern action film must have at least one single-take action scene!), the approach here gives ‘One Shot’ a real edge. It plunges the viewer right into the middle of the action and under Nunn’s capable hands, the single take approach never lessens the impact of proceedings nor dampens the action. While the camera roams and follows protagonists it never devolves into shaky-cam nonsense meaning the action is clear, crisp and often brutal in execution.

The film also impressively switches perspectives between characters throughout all the action, giving equal time and development to the bad guys and the various members of the Seal Team and black site compound. This is in turn gives some depth and a sense of desperation to proceedings and makes the film much more than just another straightforward actioner. The cast are impressive, especially Waleed Elgadi as the target everyone is either trying to kill or protect. He brings incredible emotion to his plight and keeps the audience guessing of his true intentions.

Coupled with this, is an impressive mix of gunplay and knife fight action, that allows the cast to really cut loose in some brutally staged action sequences. There’s a mean edge to it and it’s impressive how Nunn and his crew capture the ever-flowing action. It’s bloody, down and dirty, and the highlight is the stalk and slash sequence of Adkins making his way through various buildings taking out bad guys with a knife.

Straightforward of set-up it may be, ‘One Shot’ still delivers impressive action and an emotional punch.