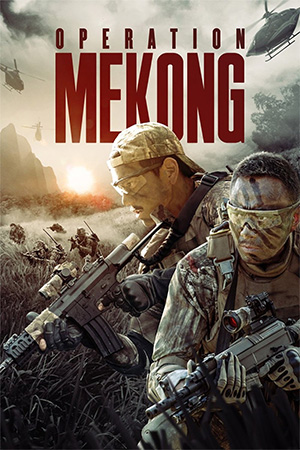 ‘The Viral Factor’ and ‘Fire of Conscience’ director Dante Lam is back to his blockbusting ways with another action juggernaut in the form of ‘Operation Mekong’. Lam this time spins real life with action insaneness, and while he doesn’t quite find the right balance between the two certainly entertains us in his take no prisoners approach to action entertainment. Based in part on the Mekong Massacre incident from 2011 where a major drug bust occurred within the Golden Triangle (an infamous area know for drug harvesting and smuggling that borders Myanmar, Laos and Thailand), Lam uses this real life operation as a base for what is essentially a manhunt chase thriller with large scale action scenes. Zhang Hanyu (‘Special ID’) plays Gao, a determined drugs cop who teams with an undercover informative (Eddie Peng) already embedded deep within Thai territory to go after notorious drug lord Naw Kahm (Pawarith Monkolpisit). What ensues is an epic escalation of destruction that literally leads to all out war as the two relentless cops stop at nothing to capture Kahm.

If one is looking for subtly and a serious dramatisation of the real life events the film references one may want to look elsewhere. ‘Operation Mekong’, while hard hitting in places, is a straight ahead action blockbuster. This may seem a little at odds and even distasteful considering the brutal realities of the real life case but rather than an intense examination/re-enactment of said case, Lam simply uses it as a jumping off point for an adrenaline charged action spectacular. Big budget, slick and utilising its Thai locations well, ‘Operation Mekong’ looks great, moves along at rocket speed and at times seems like a companion piece to his other action blockbuster, ‘The Viral Factor’: the two films sharing a slick visual style, huge scope and impressively staged wholesale destruction. It’s the action that really sells ‘Operation Mekong’ with Lam and action specialist Wei Tung (‘Seven Swords’, ‘Reign of Assassins’) orchestrating some beautifully choreographed mayhem from a shoot out-come-pursuit within the confines of a shopping mall to the finale 30 minutes of jungle warfare where the heroes raid Kahm’s drug operation. The action, despite the odd bit of ropey green screen, is big, bold, brash, bombastic and brilliant.

While the action, cinematography and location work are all stunningly executed, the tone and pacing tends to be a little all over the place. The opening twenty minutes is so disorientating in the sheer number of characters and locations introduced through a series of blitzkrieg edits and montages it may be a little off putting to some. Once the plot settles down to the two-cops-go-gunning-for-the-drug-lord narrative the film becomes easier to follow and the action ramps ups. Lam also doesn’t shy away from the brutality of the drug world as while the action is extravagant it’s often violently executed and there’s also a disturbing sub plot about Kahms’ army of child soldiers, which while gives proceedings a gritty edge, somewhat clashes with all the explosive action.

Still if one can accept they’re not in for a dramatic retelling of a real life drug case and go along for the super charged ride then one will have a reasonably good time and the last thirty minutes are worth it alone for some spectacularly staged jungle based action. Lam has made better films (‘The Beast Stalker’) but, along with Benny Chan, he is at the forefront of Hong Kong action in terms of delivering large scale spectacle.