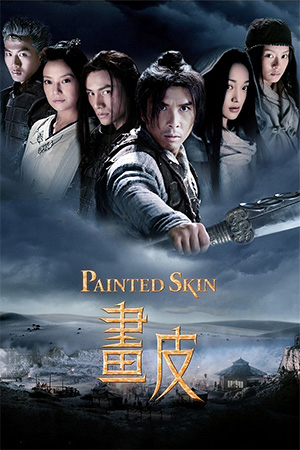 More fantasy romance than all out kung fu badassery (though there is a little bit of that) ‘Painted Skin’ might not be what you were expecting from action star Donnie Yen and Gordon Chan, the director of Jet Li’s magnificent ‘Fist of Legend’. Based on the writings of Liao Zai, ‘Painted Skin’ sees General Wang Shen (Chen Kun) leading a raid on a camp of desert bandits who are holding the mysterious and beautiful Xiao Wei (Zhou Xun) hostage. Rescuing her, General Shen whisks her back to his fortified city offering her protection and a place to stay. However, there is a demon spirit (Qi Yu-Wu) at large in the city, a demon who just so happens to be controlled by Xiao Wei. Also newly arrived in the city is Pang (Donnie Yen) a former commander in Shen’s army who has returned from battle with wannabe demon-hunter Xia Bing (Betty Sun) in tow. The two are asked to hunt down the demon terrorizing the city, a hunt that soon uncovers Wei’s malicious plans for Shen and his beautiful wife Peirong (Zhao Wei).

Although the above sounds a little all over the place proceedings play out in a relative linear fashion the complex relationships and intentions of the leading characters giving the film its meat. The horror element is all but played down (despite the fact one of the characters eats human hearts in order to stay alive!) with the romantic fantasy aspect being the main angle of the film. Some may be disappointed by this approach but for the most part it works, the characters engaging enough to make you care despite the fact the makers can’t get away from too many scenes being dragged out to melodramatic proportions. While there is a nice balance of fantasy, romance and action a good ten or fifteen minutes could have been shaved off the run time in order to make everything a littler tighter.

However, despite the slow burn romantic nature, ‘Painted Skin’ still delivers on the slick entertainment front. There is no denying this is a good-looking film, beautifully filmed with CGI enhances (mainly used when a demon is fighting or revealing themselves) kept to a refreshing minimum. With the impressive locations, remarkable production design and some crisp and crunchy fight choreography, it’s nice to see so many aspects being kept practical. Donnie Yen is probably the main reason many will see this and while he doesn’t really dominate proceedings it’s good to see him playing more of a joker (and a scruffy one at that!) rather than another ultra-cool, badass, super-fighter. Ok, he is still a badass super-fighter, just not as showy this time around. Yen does get to cut loose in some awesome fights scenes co-ordinated by legendary action director Tung Wei (‘Dao’, ‘Seven Swords’).

Zhou Xun is also memorable as the conniving Xiao Wei and Chan and his crew must be commended for making a fantasy film that isn’t continually rammed to the rafters with ridiculous CGI. The restraint works well in the film’s favour even if it does tend to drag in the second half before things finally pick up for the spectacular showdown. Not to everyone’s tastes, could have been a little shorter and hardcore Yen fans may be let down by the lack of dynamic hand-to-hand combat (it being much more weapon and high-flying based here) but ‘Painted Skin’ is still a stylish slice of fantasy filmmaking.