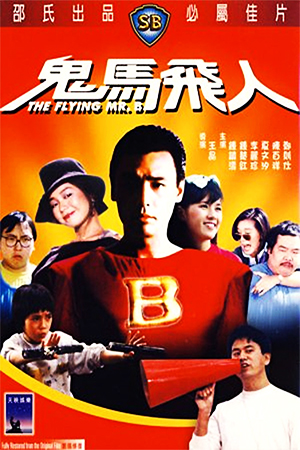 Wong Jing presents his own take on ‘Superman’ in this amusing though frustratingly patchy Shaw Brothers production. In the cast for Jing’s slipshod telling is a plethora of familiar faces from 80s Hong Kong cinema, including a very young Cherie Chung and Kenny Bee at the height of his fame.

Shi (Bee) is the put-upon football coach at a Hong Kong secondary school, cursed with a team of misfits and feeling the pressure from his superior. As if such pressures were not enough, he also fights a constant battle of words with sassy fellow teacher Miss Cheung (Chung) though this is merely a pretence both parties maintain to hide their affection for one another. His best friend Zhu (Cheng), the science teacher at the school, accidentally invents a pill that can give a man superpowers and when the bullied Shi consumes it, he finds himself with an intriguing alter-ego, Mr.B. Using the brief spurts of power that the pill affords for stopping criminals, Mr. B AKA Shi finds himself the object of adoration for the whole of Hong Kong and, in particular, Miss Cheung. This new superhero is also noticed by the underworld who are especially keen to find the source of the powers and acquire them for their own nefarious needs.

With more cheese than a Mini Babybel factory, ‘The Flying Mr. B’ is about as dated as Hong Kong comedy gets. Full to the brim with garish fashions and the infantile humour that Wong Jing has been offered an honoury doctorate in, this is a production that is hard to recommend to those not fully immersed in Hong Kong cinema. That said, there is still a certain amount of charm to be appreciated here and a few proper moments of mirth. Wong Jing throws so much at the screen that it’s little surprise that some of it sticks and even translates.

Much of the appeal with ‘The Flying Mr. B’ is down to the bumbling everyman Kenny Bee. Despite his status as partial heart-throb, Bee is never better than when he is able to be self-deprecating and play on his inefficiencies. Bee strikes up a good on-screen partnership with Cherie Chung and their scenes together hold the story in one piece even when the pace slackens. Kent Cheng is ever reliable as the equally inept sidekick while Phillip Ko Fei hams his own scenes mercilessly, relishes each and every cacophonous belly laugh.

‘The Flying Mr. B’ is very thinly plotted and stuffed full of age-old gags and prat-falls. Wong Jing is not a director who labours over creating something special and this erratic comedy is a fine summary of the notorious film-maker. Despite these faults, its impossible not to be slightly disarmed by the mayhem on screen and for this reason alone it is a partial recommendation.