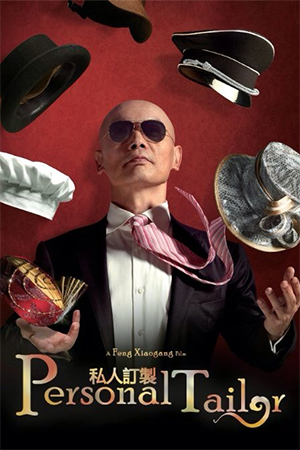 The one Chinese film-maker who could be judged to have the Midas Touch is Feng Xiaogang. Pretty much everything his name has been attached to, from rom-coms to war dramas to big budget disaster epics, every work seems to get the cash registers ringing uncontrollably at the local box-office. This has led to the numerous comparisons between him and Steven Spielberg, another director who can bring a level of excellence to just about anything he cares to; comparisons themselves are empty, but there is a certain truth in the skills of both men to tap into the popular consciousness without ever being mere populists.

‘Personal Tailor’ focuses on dreams, fantasies of being a better person, being in a better situation or retaining your soul in spite of temptation. Four experts in providing this service can, for a price, give any guest their dream life and each take numerous varied roles in the stories that unfold. Firstly there is the fantasist who wants her courage and bravery recognised by standing up to interrogation by the Nazis. Then there is the chauffeur who is disillusioned with the corrupt fat cats he works for and decides to show incorruptible a ruler should be. Meanwhile a popular director acclaimed as the world’s most vulgar and classless desires the ability to appreciate and produce fine art, the kind that floats well above most intellects. Yet each scenario develops beyond the fantasy of the client and shows that perhaps their various ideals come with certain strings attached.

With cameos by Jackie Chan and Wang Bao Qiang and production values that make every second of this film look divinely sumptuous, ‘Personal Tailor’ is another blockbuster that sweeps up  all the fandom before it. Those words almost seem critical, but the simple fact is that Xiaogang’s latest work is the kind of slick, seamless film that one can admire as much as enjoy. It takes the old ‘Fantasy Island’ conceit of how dreams inevitably turn sour and develops it into a two hour cruise through a variety of concepts and emotions.

What makes ‘Personal Tailor’ so effective is that it pitches its tone just right. Starting with a wonderful pastiche of World War II films and then onto a crafty satire on political ambition and Chinese obsession with luxury, Feng Xiaogang’s hit is the sign of a director at the very top of his game. Regular leading man Ge You seems to be having the time of his life playing scores of different roles and he is backed by three personable stars who complete the ‘Personal Tailor’ quartet perfectly. Perhaps the best part of the whole film though is the self-deprecating tale of the trouble director who wants to be taken seriously – this is a wickedly amusing piece of self-awareness and apt mockery of what can be considered art (if you can understand it or you like it, it isn’t high-brow enough).

‘Personal Tailor’ manages to switch from satirical comedy to introspective poignancy in the final act without missing a beat. Even at its most apparently fluffy though, this is a comedy with layers of interest for anyone who cares to dig. Even the noble, yet heavy-handed environmental message at the end doesn’t derail the momentum and Feng ends the film with a a few lines that dismantle any pretension of idealism. This cannot be art – I simply enjoyed it too much!