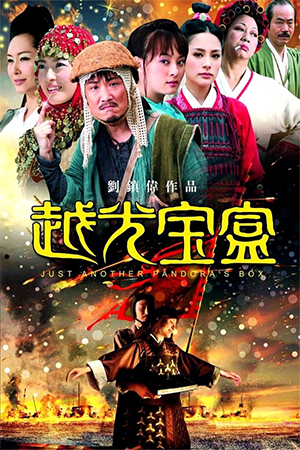 I could spend a lengthy paragraph explaining the plot of this ‘nonsense comedy’. Suffice to say, all you need to know is that this is an update of Jeff Lau’s hugely popular ‘A Chinese Odyssey’ films but with Ronald Cheng in the lead role instead of Stephen Chow. Already, many reading may have made their decision based on this sparse information: Ronald Cheng further pushed into the mould of the new Chow will undoubtedly upset quite a few, while others may be eager to see if the post-modern historical comedy still has legs.

Ultimately, Ronald Cheng is good as the dopey thief turned unwilling participant in a battle between immortals and the director spares little detail as he sends up recent Chinese epics like ‘Red Cliff’. These minor pluses – along with a cameo-laden cast – might just recommend it beyond its target Cantonese audience. Be warned though – comedies of this ilk are like apple-bobbing in hot tarmac: you may get the odd treat along the way, but it may cost you significant pain and discomfort to achieve this.

‘Just Another Pandora’s Box’ is loaded with Chinese pop-cultural references to such an extent that the main enjoyment for non-Cantonese viewers might be sitting there with a piece of paper and writing down all the allusions and spoofs that do not go straight over your head – maybe you could give yourself a little prize if you reach a pre-agreed total (I won myself a few scoops of Carte D‘Or). ‘Titanic’ is spoofed for the 631st time, ‘Kung-Fu Hustle’ and ‘Red Cliff’ are the local films that are specific targets and there are numerous nods to whatever is popular in Hong Kong at the time. It’s the definitive ‘Marmite’ production though.

Having emerged from the debacle that was ‘Kung-Fu Cyborg’, Jeff Lau returns to his beloved sub-genre of the nonsensical and it’s certainly an improvement on his previous effort. Yet ’Just Another Pandora’s Box’ is 100 minutes of slightly frustrating referential comedy, occasionally interrupted by the odd chuckle. Some might be willing to accept that ratio, but this reviewer was not too disappointed to see the end credits roll. Maybe that is the fault of this particularly parochial sub-genre of comedy rather than anyone involved – the Cantonese nonsense comedy will continue to baffle me as long as I’m foolish enough to keep watching them.