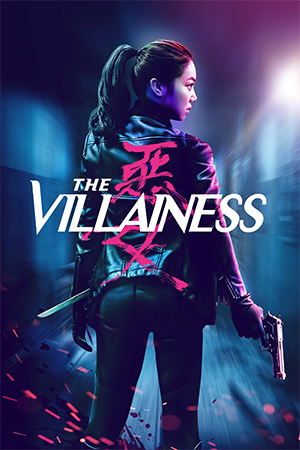 Once an assassin, always an assassin: that’s what ‘The Villianess’ seems to be saying and it’s what the film’s heroine Sook-Hee (Kim Ok-Bin) soon comes to realise. As a youngster Sook-Hee sees her family slain and is taken in by a group who train her in the art of the kill. Years later, Sook-Hee is a ruthless killing machine laying waste hordes of bad guys in a warehouse attack when she is apprehended by the authorities. Rather than be sent to jail she’s enlisted into a shady government assassin school. Here she is trained to become a sleeper agent, given normal life skills and then embedded into an everyday life waiting to carry out secret missions. Effectively swapping one life of killing for another, here two clandestine lives inevitably collide and are (non-surprisingly) more connected than she ever realised.

Buoyed by a shed load of hip cred, ‘The Villainess’ is an often striking action thriller with an incredible performance from its lead actress, Kim Ok-Bin, but unfortunately doesn’t quite live up to its rep. As much a twisty-turny drama as an all out action flick, ‘The Villainess’ overdoes both its noble attempts at gritty drama and action technical wizardry: the flick never finding a satisfying balance between the two. Proceedings open in grand fashion with a seemingly one-take, POV action onslaught as Sook-Hee takes out reams of disposable bad guys. Gleefully violent and breathlessly staged it unfortunately feels a little late to the game. With everything from ‘Oldboy’ to ‘Hardcore Henry’ to ‘Warrior King’ to even ‘The Reverent’, the one-take action scene feels like its reaching saturation. Certainly when there is a lot of digital fudging and editing making it all appear as if it’s one take. This lowly reviewer may be on his own with this view, but the action in ‘The Villainess’ (which is one of its main selling points) suffers somewhat from all the gimmickry at play.

There is certainly some impressive creativity and choreography on display (the motorcycle sword fight is a doozy) but sometimes the need to make everything appear as if it’s happening in one long take and the need to make the viewer feel as if they’re actually in the fight gets in the way of enjoying some finely crafted action. Likewise the drama in-between all the action craziness is somewhat laboured with the revelations about Sook-Hee’s past unnecessarily convoluted. It would have been more satisfying if more time had been spent on Sook-Hee’s time at the “assassin school” and a little more time spent on her integrating into her normal life facade rather than defaulting to the usual out-for-revenge/secrets from the past plot trappings.

Kim Ok-Bin’s central performance is the saving grace. An outstanding actress who isn’t afraid to go to dark places (see her incredible performance in Park Chan-Wook’s underrated ‘Thirst’) she throws herself head first into the challenging (both physically and mentally) role of Sook-Hee. When the film threatens to frazzle the eyeballs with searing action or dip too far into a melodramatic slog, Kim Ok-Bin keeps it all on track showing she can be fiercely committed to all the violent action and provide moments of tenderness when her character doesn’t have to kill.

An ambitious and inventive film for sure with all the right elements to make it a hit with viewers and critics alike but one that never wholly satisfies or lives up to its good rep.