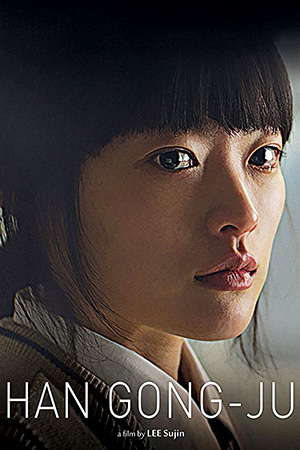 Schoolgirl Han Gong-Ju is, for reasons well hidden, sent to stay with her old school teacher’s mother in a part of Korea far from home. The mother is suspicious of her new lodger despite Han’s attempts to make herself useful and prods her son for information as to why this girl was suddenly taken away from home. At school Han also finds the curiosity of her classmates overbearing, yet begins to make friends with gregarious pupil Eun-Hee who identifies the potential in Han’s singing ability. The chance to move on from the incident in her home town is threatened though when one of her friends innocently puts her demo reel on social media.

‘Han Gong-Ju’ is a purposefully paced, thoughtful and ultimately upsetting drama about how far-reaching the effects of certain crimes can prove to be. By the end of the film, it proves to be a deeply saddening, utterly infuriating commentary on everything from machismo and bullying to how some parents’ blind faith in their beloved offspring despite their crimes is as sickening as the incident itself.

Lee Su-Jin’s film works so well and gets under the skin so incessantly because it is realistic. The characters are not sassy, wise-cracking inventions of vapid screen-writers: they have all of the vulnerabilities and quiet sadness that ordinary people tend have to deal with. In a world that is increasingly obsessed with polished, play-doh faced ‘celebs’ and aspirations to ride on their coat-tails, this is all the more resonant. The story also benefits from its initial lack of detail and the hints at the tragedy are revealed very sparingly. It isn’t too difficult to deduce what has happened, but the film shows the long-term aftermath of a terrible crime.

‘Han Gong-Ju’ isn’t just a social realist tragedy though – it offers hope in the shape of friendship. The sisterly relationship that Han begins to enjoy with plucky Eun-Hee is a joyous inclusion and shows how even the saddest of events can be dealt with to some degree. It does, however, make the eventual revelation even more of a punch in the guts, but there’s no doubt it hammers home the message with needed power. The final scenes are intentionally ambiguous and leave a lasting impression, giving ‘Han Gong-Ju’ a denouement that is harrowing or hopeful dependent on your perspective. One thing is not in doubt though: this is a film that hides within its subtle execution a powerful social critique that pulls apart the sad misogyny and blame culture that is still far too influence in the modern world.