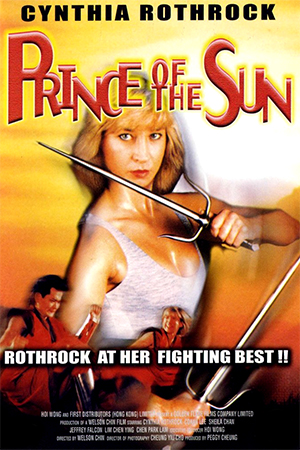 As mad as a bag of snails is the best way to describe ‘Prince of the Sun’, a late 80s Hong Kong cash-in on Eddie Murphy’s ‘The Golden Child’, starring Cynthia Rothrock. Well not really starring, as she is missing for huge chunks of the film. She plays a Shaolin monk (yep, a female Western monk complete with hair) who is given the task of guarding the reincarnation of their leader: a six year old kid. When said kid goes missing, with a bunch of evil monks after him, Rothrock must go in search and protect the little blighter. Well, that’s how the film is set up. What ensues for the next forty minutes is “comedy hi-jinks” as the little rascal is taken in by wayward misfits Conan lee and Sheila Chan. But don’t worry, there is still a ton of wicked martial arts action come the final part of the film.

One’s enjoyment of ‘Prince of the Sun’ will depend on one’s enjoyment, or tolerance, for Hong Kong comedy. The “comedy” in this sense mainly constitutes of Sheila Chan getting punched, called a bitch and thrown out of a window. Yeah, hilarious. Her constant skin crawling wailing and need to shout everything she says doesn’t help either, though it’s no excuse for the repeated “comedy” beatings she receives. Something is obviously lost in the translation but even if one was “to get” the humour, the film still comes off as somewhat offensive. The kid also being, sometimes realistically, put in harms way doesn’t aid things, though the dummy used when he is holding onto Rothrock in the fight scenes is so obvious it’s hilarious. In fact, it’s funnier than the actual “comedy” aspects.

To be fair the “window” gag is actually quite humorous but everything else that happens is either just outright bonkers or in bad taste. The kid staying with the two social misfits gets old fast and they should have just stuck with the whole Rothrock getting the kid back and protecting him from the evil kung fu monks plot. This eventually kicks in and almost saves the film with several rounds of break neck martial arts. Choreographed by Yuen Tak (‘Hitman’) the fights are sharp, brutal and intricate. Rothrock shows her stuff and goes toe-to-toe with fellow westerner Jeff Falcon (‘Outlaw Brothers’) on several occasions. The best is a three way fight in a park, which demonstrates just how good 80s/90s Hong Kong action was.

If the rest of the film had been as good as the last half hour then ‘Prince of the Sun’ would be more fondly remembered. But all the so called comedy, bonkers plotting and mistreatment of several characters make for tedious viewing. See it for the fights and for Rothrock getting to cut loose in a Hong Kong production from yester year.