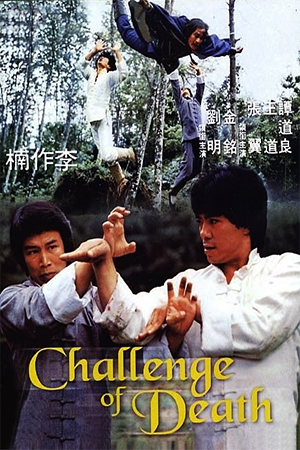 Four years after ‘The Hot, The Cool And The Vicious’, director Lee Tso-Nam decided to make this pseudo-sequel to his runaway success in the hope that he could recapture some of the old magic.  Wong Tao, Tan Tao-Liang and Tommy Lee all returned, albeit as new characters, and the stage was set once more for some friendly rivalry and rip-roaring battles.

Security Officer Lu (Tan Tao-Liang) is on the trail of a mysterious gun smuggler.  His investigations lead him to Madam Wu, an eccentric lady of the night who appears to be the link between smuggler and client.  Luckily for Lu, it appears that she has a soft spot for the womanising gambler known as Chang (Wong Tao) so Lu arrests him in the hope that, with a little brute force, he will assist in the case.  His inside information brings about the identity of the true man behind the smuggling ring who is a master of the little-known Spider kung fu.  Only by combining Lu’s Dragon fist and Chang’s Snake fist can the two heroes stand a chance of bringing this villain to justice.

Action-wise, ‘Challenge Of Death’ is certainly a worthy successor and has a lot to offer.  As with the first flick, Tao mainly provides the impressive handwork whilst Tao-Liang sticks to what he does best and lets his feet do the majority of his talking.  This is a successful mix that is employed for the majority of the fights and is clearly at its most effective for the thrilling finale in which our two leads combine their skills to battle the ruthless Spider kung fu master.  However, it is the Spider style that emerges as one of the most disappointing elements of the film, unless you like your kung fu to be humorous.  The cumbersome combination of poor wirework and rather silly hanging manoeuvres only really provides unintentional laughs and this can overshadow what is an otherwise well choreographed set of action set pieces.

The plot is probably the point at which most fans will find their patience lacking here.  Where ‘The Hot, The Cool And The Vicious’ was a tightly crafted traditional kung fu movie with a story that was easy to wrap your head around, ‘Challenge Of Death’ introduces rather inane moments of comedy and provides a plot line that really could have been told in half the time.  If it had been two lesser known actors in the starring roles then this lack of direction could have caused the production to fail, but the stars’ action abilities do keep the pace moving and force you to watch on in anticipation of the next confrontation.

‘Challenge Of Death’ was always going to provide some exhilarating action thanks to the collection of captivating combatants, but the story certainly leaves a lot to be desired.  It does however, do just about enough to hold your attention in-between the kung fu and it’s worth sticking with just to see the closing fight sequence.  Overall then, this is not nearly as good as its predecessor but a worthwhile watch none-the-less.