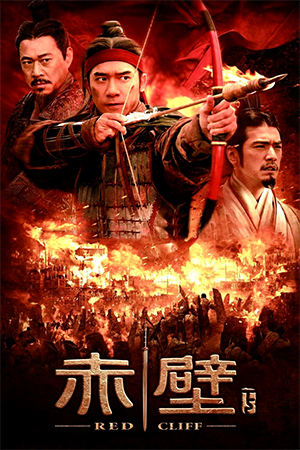 For those of us that thought John Woo had descended into a third-rate self-parody, for those who cannot see doves in the park without thinking of Woo’s overused (not to mention increasingly incongruous) motif, ‘Red Cliff’ has arrived. For anyone who sat through two hours of ‘Mission:Impossible II’ and felt every pore of their body exuding bile, for the many who turned to drinking Domestos in the murky aisles of ‘Wilkinsons’ after experiencing ‘Paycheck’, here is the re-telling of one of the great stories of Chinese civilisation by a director we vaguely remember.

Woo wisely decided to release this epic – and that word has lost as much value as the pound in recent years – production in two parts, allowing the complexities a full five hours to play out on the big screen rather than trying to squeeze them into a comfortable size for international consumption. There are notable, controversial changes from the original chronicles and the novel ‘Romance Of Three Kingdoms’, yet just to see John Woo behind the lens of such an outrageously lavish release rather than contriving to fit some avian slow-motion in another awkward Hollywood blockbuster is significant compensation.

Nefarious Prime Minister Cao Cao (Zhang Feng-Yi) persuades a reluctant Emperor Xian to allow him to use the multitudinous forces to quell a suspected rebellion in the south of the kingdom. Although one advisor sees through this thinly-veiled attempt by Cao Cao to manoeuvre himself into a position of near total control, the plan goes ahead to destroy warlords Liu Bei and Sun Quan, the initial battles intially being won quite easily. Liu Bei, keen to protect his citizens from impending slaughter, organises an ingenious stand-off against Cao Cao’s cavalry, where reflective shields gives the protectors a vital advantage. Eventually the superior numbers prove too much and the enemy forces Liu Bei and his armies into retreat, along with thousands of refugees. Zhuge Liang, chief advisor to Liu Bei, decides to venture to Sun Quan’s kingdom, Wu, and ask the canny young ruler to form an alliance with them.

On arriving in Wu, Zhuge finds a pensive Sun Quan (Chang Chen) contemplating whether to stand up against Cao Cao – who is still officially an ally of their kingdom. An impassioned Zhuge explains that any pretense of friendship by Cao Cao will soon turn to widespread totalitarianism and, despite criticism from his numerous wizened old advisors, it is imperative to join the war on the side of Liu Bei. Sun eventually agrees and Zhuge subsequently calls on the services of chief commander of the Wu forces, Zhou Yu (Tony Leung), who is busy training his troops near the legendary Red Cliff. Although still massively outnumbered by the approaching hordes, the southern kingdoms are now ready to engage on land and sea with the war moving into its next phase.

It would take something special to stir me from my ‘Chinese Historical Epic’ daze, a condition that has increased in severity during the past few years with the world and his wife making their version of Chinese history. Of course, this particular ‘Red Cliff’ project had the greatest budget in the history of Chinese cinema to call on, but every recent costume drama – of vastly differing budgets – has looked effortlessly opulent without necessarily being any better than the last. Yet John Woo’s excellent return to form is a notch above its contemporaries because it is more than just impressively-peopled wide-angle shots and eye-straining battle sequence. For a story as rich in detail as ‘Red Cliff’, this is ironically Woo’s most measured film of recent years and certainly his most human.

‘Red Cliff’ has been a troubled production with cast changes and delays rife throughout shooting. Nevertheless, the chaos behind the scenes never interrupts the vision on screen and Woo rediscovers his insight into brotherhood, friendship and heroism. These themes, long associated with the director, seemed to have been either jarringly inserted into recent flops or altogether deleted, so to see him playing with these ideas on an epic stage is gratifying indeed. The intimate scenes blend superbly with the undeniably incredible battle sequences, making a 140 minute duration canter along confidently. A first-rate cast helps us forget that this was intended to be the reunion of Chow Yun-Fat with his mentor and focus on the drama that unfolds. Zhang Feng-Yi is the kind of scenery-chewing villain that makes every battle ripe with drama and full of tension while Chang Chen impresses as the young Wu ruler keen to show himself an old head on young shoulders.

As stated, there are changes to the original texts and not all of them sit comfortably. The concession to modern audiences of including Vicki Zhao’s Sun Shangxiang in the actual fighting is awkwardly arranged as are a few none-too-subtle allegories. Yet, by the end of the first part, ‘Red Cliff’ leaves the impression of the peerless’Empire Strikes Back’ where, despite having no conclusion of its own, all of the groundwork of the characterisation and story make the next chapter an exciting prospect. John Woo has returned – at least until ‘Paycheck 2’ is announced on the back of ‘Red Cliff’s worldwide acclaim.