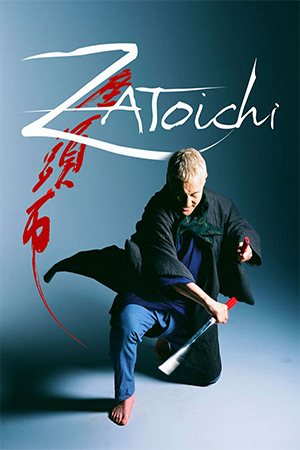 Zatoichi (Takeshi Kitano) is a blind wondering masseur. He also happens to possess exceptional skills with a sword. As he approaches a town he helps a woman carry vegetables. In turn she offers him a place to stay and explains to him about how the Ginzo clan run the town and demand protection money from the villagers and farmers every day. At the same time a skilled Ronin by the name of Hattori (Tadanobu Asano) and his sick wife O-Shino (Yui Natsukawa) also arrive in town. Desperate for money to cure his wife’s sickness he gets a job as a bodyguard working for the Ginzo clan who have aspirations of wiping out the rival gangs. Meanwhile, Zatoichi engages in his favourite pastime of gambling and makes the acquaintance of fellow gambler Shinkichi (Gadarukanaru Taka). When Shinkichi buys two Geisha’s for the night Zatoichi senses that they are not genuine. It turns out that the Geisha’s family were slaughtered for their money by the Ginzo clan, and after leaving a bloodbath behind him in a crooked gambling den belonging to Ginzo clan, Zatoichi’s fate lies in the confrontation of the Ginzo clan.

As ‘Zatoichi’ nears it’s end there are some surprising revelations which I shall not divulge here for fear of spoiling the film for anyone who has not yet seen it. But the revelations about the character of Zatoichi himself will give viewers something to dwell on after the credits have finished rolling. It is worth pointing out however that the English translation is inaccurate and therefore gives misleading implications to English speaking audiences when compared to that of Japanese speaking audiences.

Although I would have never thought of Kitano in the role of Zatoichi, one of Japan’s most loved characters, however he fits into the role extremely well. Tadanobu Asano also puts in a subtly exquisite performance. Though all cast members apply their skills admirably.

Kitano directs with his usual quirky measured style punctuating the narrative with his classic odd ball humour. One of the standout comic moments is the scene where Shinkichi is teaching three farmers the art of swordsmanship. Best known in the west for making modern Yakuza films, Takeshi proves himself equally at home depicting feudal Japan. He never allows the film to concentrate solely on the character of Zatoichi, and that is one of it’s strengths. Zatoichi remains one of the characters the audience knows the least about while the characters of O-Kinu and O-Sei receive a more comprehensive character background.

‘Zatoichi’ also sports a pleasing music score, blending traditional and modern forms of music successfully. Of note there is a quirky scene with a group of farmers applying their hoe’s to the rhythmic beat of the soundtrack.

If I were to level one criticism at ‘Zatoichi’ it would be at the excessive use of CGI. Most of the CGI is jerky and could have looked a lot better using physical effects. However, it seems to be becoming a very fashionable trend to have CGI blood splattering everywhere. In my opinion this looks very artificial and reduces the intensity of the scenes it is utilized in. I fear however that this is not a trend that is going to cease in the foreseeable future.

‘Zatoichi’ is another quality production from ‘Beat’ Takeshi Kitano. While I don’t think it is as good as his masterful ‘Sonatine’, I would not be inclined to compare the two as they are both very different kinds of films. Slightly marred by the excessive use of CGI, this is a relatively minor criticism. Recommended for both fans of Kitano and chambara films alike.