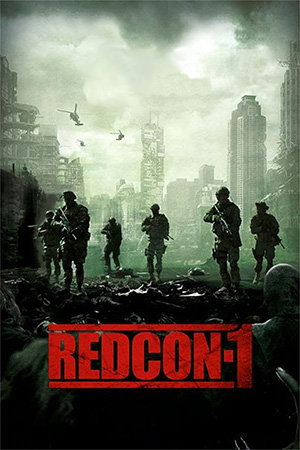 Chee Keong Cheung, director of ‘Underground’ and ‘Bodyguard: A New Beginning’, returns to screens with the blood soaked and brutally charged ‘Redcon-1’. Mixing the zombie, martial arts and men-on-a-mission genres, ‘Redcon-1’ adopts a take no prisoners approach and rarely lets up over its almost 2 hour run time. The UK is overrun with the walking dead, so much so there’s a whole area known as the quarantine zone where the dead run rampant. In this zone is a doctor, who he might just hold the key to the cure for the virus that is turning everyone into the rampaging zombies. Tasked with retrieving the doc is Captain Marcus Stanton (Erhuero) and his squad of Special Forces bad asses, who once inside the quarantine zone find their plans going to hell fast as they are constantly pursued and hunted by the marauding dead.

Upping the budget and ambition, Cheung delivers his slickest film yet that brings tons of ferociously mounted zombie slaying action. Right out the gate the flick means business and the action comes thick and fast: a mixture of military style gunplay and martial arts action. The action is mounted with bloody verve, often brutal in execution and with some impressive gore and bloody-squib effects. While fast moving and intense, one can always discern what is going on, no shakey cam or frenetic editing obscuring the action. There’s so much zombie killing action crammed into the lengthy runtime that even the most hardened zombie movie fan will be satisfied by the impressive action and gore on display here.

Unfortunately, the great action and effects are let down somewhat by some strange stylistic choices. Scenes, often the quieter scenes, aren’t allowed to play out but instead the makers constantly replay footage from earlier in the film or footage we haven’t seen yet over the top of these scenes. It’s fine at first, to set the context of the ruined world our characters find themselves in, but is overused to the point of frustration: we don’t need to be seeing or re-seeing all this footage when we already have a scene playing out in front of us. It robs the film of the tension it sorely needs (the film is certainly ferocious and full on, but tension is lacking unfortunately) and just seems unnecessary. In addition, the almost two hour runtime does start to feel a bit indulgent but props to the makers for sending the narrative on unexpected trajectories, as ‘Redcon-1’ turns out to be more than just a straightforward men-on-a-mission flick.

Gripes aside, ‘Redcon-1’ still delivers on the bloody zombie action front, with a nice side of martial arts, and Cheung and his crew also stretch a limited budget to create a striking visual look and bring plenty of bang-for-their-buck.