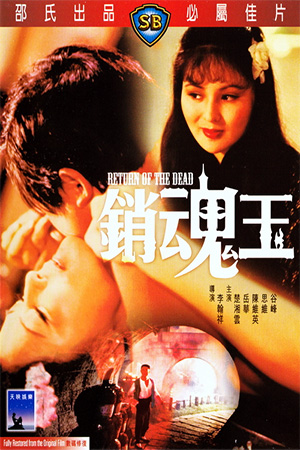 Three patients of a psychiatric institute recount the traumatic tales that placed them in confinement. Businessman Wang Zhi He (Ku Feng) and wife (Wang Lai) run a profitable family bean-curd operation, whilst their son Xiao Bao (Lau Luk-Wah) works in the local steel factory. One evening they are visited upon by family friend Hu (Yeung Chi-Hing) who offers them a magical talisman that can grant three wishes, but warns with each wish granted misfortune follows. Willing to risk the misfortune, Wang wishes for enough money to pay off his business, with dire consequences.

On the rocky shores of Blue Lake two men, Jiang Tao (Yueh Hua) and Lin Kun Quan (Antonio Ho), are found. Jiang is unconscious, whereas Lin is dead. When Jiang comes to in hospital police officers are there to question his unusual circumstances, being that Lin bore signs of strangulation. Jiang details how his penchant for drink and rowing combine, and how one evening he happened across a mysterious young woman, Meng Wei (Chen Wei-Ying), swimming naked in the lake. When Meng requests that Jiang bring his friend Lin to meet her, disaster follows.

During the turn of the century, gorgeous beauty Xiao Yun Yu (Linda Chu) is rumoured, amidst the local community, to have died of exhaustion after a night of pleasure in the bed chambers of her husband, wealthy lord Kao Tai Zhang (Chun Wong). One evening shortly thereafter, young rickshaw driver Xiao Da Zhi (Tai Kwan-Tak) picks up a captivating passenger who bears more than a passing resemblance to the deceased Xiao. She claims to be Xiao’s twin sister and, having no money on her person, leaves Da Zhi with an expensive pearl necklace to hold until they meet again. But is she really who she says she is, or is Yun Yu’s spirit reaching out from beyond the grave for one final enticement?

Once renowned for his sumptuous Huangmei Opera adaptations such ‘The Kingdom and The Beauty’ (1959) and ‘Love Eterne’ (1963), Chinese-born director Li Han Hsiang also won favour as one of the Shaw Brothers’ preferred in-house helmers of soft-core erotica during his time with them once relaxing censorship opened the way for such in the early seventies. Like much of Li’s output in the erotica arena, ‘Return of the Dead’ (1979) followed the format he had established as a winning formula prior: the multi-episode anthology. Thankfully, unlike his previous soft-core supernatural opus of the same year, ‘The Ghost Story’ (1979), herein the edict was a trio of short stories each capped by a sting-in-the-tail twist, whereas the prior production was hampered by an amusing opening story that was followed by a protracted main story that more than outstayed its welcome. Unfortunately, however, as per many Li’s seventies anthologies, ‘Return’ commences with perhaps its strongest story as its opening episode which in turn lends the film an odd, off-kilter rhythmic flow. The key to sustained audience participation with any anthology is usually start strong to hook the viewer, then successively build on that strength but Li plays his hand straight from the outset then meanders off into soft-core erotica as a bridge before wrapping things up in most bizarre, almost slapstick, fashion.

The opener is a Hong Kong rendition of British author W.W. Jacob’s 1902 short story “The Monkey’s Paw” and, as well as being played wonderfully straight, is ably carried by character actors Ku Feng and Wang Lai in the primary roles. Only minor deviations from the source are engaged (the monkey’s paw becomes a hand-carved wooden Three Wise Monkeys talisman and the initial wish accounts for seven decades of inflation), so any student of literature with even a cursory knowledge of key works will foreshadow the first episode’s climax. Yueh Hua and Antonio Ho take the leads in the second story, but once Ho is introduced most viewers will unravel the mystery of Chen Wei Ying’s presence quickly; but it is this episode that affords Li the gratuity of having his leading actress play out her role entirely sans wardrobe. The closing story, as well as injecting further gratuitous nudity (with the assistance of Shaw’s’ bevy of body doubles) into the film, also lightens the tone by playing most supernatural elements for laughs. That is, until Chan Shen is introduced as a grave robber who harbours a penchant for necrophilia with the more attractive of the recently deceased, and then the film veers into some perversely twisted black comedy.

Outwardly, ‘Return of the Dead’ may appear to be a collection of unrelated ghost tales, but dig not too deep and one will find a largely transparent theme of individuals desperate to achieve wealth and fortune, often through any means available and with little forethought as to the consequences of their greed. Of course, per customary beliefs, the road to good fortune is often paved with misfortunes and hardships; for all good things in one’s life, one must suffer through the bad. To that end, Li’s ghostly anthology achieves its ends as a series of cautionary tales of the ills that might befall those who succumb to their own greed and desires. But along the way, amidst the garden of earthly delights that Li was wont to pepper his films with (for the easily distracted), there are some genuine moments of drama and horror to be had, as well as a handful of instances of perverse humour that will undoubtedly confound. However, for all its unusual diversions and bizarre shifts in rhythm and tone, ‘Return of the Dead’ is a decent trilogy of unearthly greed and worth a look for the adventurous.