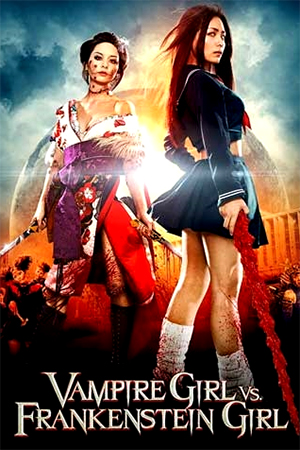 The effects maestro and director of madcap splatter flick ‘Tokyo Gore Police’, Yoshihiro Nishimura and the dude behind the equally nutty ‘Zombie Self Defence Force’, Naoyuki Tomomatsu, team up to bring a film with a title even more inspired than those two films and with just as much Looney tunes, ultra violent gore. ‘Vampire Girl VS Frankenstein Girl’ (‘VGvsFG’) is actually a more lighthearted (read: very silly) entry in the new wave ultra gore Japanese movement. Well, as lighthearted a film which features face ripping, non-stop geysers of blood, girls who are into wrist cutting and pretty much every human appendage being severed at some point can be.

It’s your basic story of the new girl at school falling for popular boy, as quiet Monomi (Yukie Kawamura) falls for Mizushima (Takami Saito). Attempting to win his affections, she takes part in the Japanese tradition of giving the one you like chocolate on Valentines Day, making them aware of your feelings. Mizushima accepts and all looks well for the two new love birds. Well, not really. Monomi is actually a vampire, who has made the chocolate with her own blood which once eaten by Mizushima begins to turn him into a vampire. Plus, Mizushima also has to contend with the crazy affections of another girl, Keiko (Eri Otoguro) who after trying to take Mizushima for herself ends up dead (with her face literally smashed in) and who is then brought back to life by the school’s lunatic scientist as, yep, Frankenstein Girl. Thus the showdown for Mizushima’s love is set as, well, ‘Vampire Girl VS Frankenstein Girl’.

Really, trying to sum up ‘VGvsFG’ succinctly is near impossible as it really is just a collection of ever increasing zany, outlandish and often disgusting concepts and set pieces. It’s as if the makers of ‘Machine Girl’ and ‘Tokyo Gore Police’ had a bunch of unused ideas and a bit of money leftover and made this quick and quirky cash in. Which is no bad thing, as on its own tongue firmly in cheek mission to entertain in the most disgusting and offensive way, ‘VGvsFG’ pretty much succeeds. It doesn’t quite have the slick action edge of ‘Machine Girl’ (and its nowhere near as funny) nor reach the darkly surreal heights of ‘Tokyo Gore Police’ but it’s still a fast, fun and fairly creative slice of Japanese shock gore. The make up effects are impressive, the CGI ones not so much and there are so many bizarre concepts, creations and set–pieces you could play a drinking game for every time one appeared on screen and easily be stone cold drunk in under ten minutes. Highlights include: Mizushima seeing people as walking, talking sets of blood arteries; Keiko taking her severed arm, attaching it to her head thus turning herself into a human helicopter; nails and screws that come alive; and bizarre swipes at Japanese culture including Ganguro Gangs (where Japanese girls literally paint themselves black in order to look more African American and is realised here with some very unsettling make up effects) and wrist cutting which is, obviously, played up for comedy effect!

Despite coming in under the 80 minute mark and certainly a whole lot of ridiculous, gore soaked, Japanese fun, ‘VGvsFG’ perhaps suffers from gore overload fatigue. There seems to be a rash of these type of films being churned out in Japan recently and while some are destined for cult status, one gets the feeling that each new entry is just trying that bit too hard to be crazy, offensive, gory and cult like. ‘VGvsFG’ is fun, especially if watched drunk and with a group of like minded fans but the mini genre is fast becoming saturated with each entry being a little less mad, bad and cult like. Still if you ever wanted to see a flick where a vampire girl faces off against a Frankenstein girl then this is probably the only movie to give you such a thing.