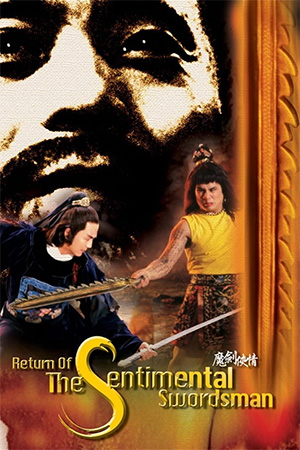 After etching his vision of Gu Long’s popular novel on the public consciousness in the hugely successful ‘The Sentimental Swordsman’, Chor Yuen inevitably returned with this star-studded sequel, reuniting with Ti Lung once again. Our eponymous hero is this time faced with even more colourful and duplicitous rivals, each with their own desperate desire to rule the martial world.

Having fended off the ‘Plum Blossom Bandit’, heroic, yet melancholy swordsman Li goes into hiding for a few years while his loyal ally Fei (Yee) decides to settle down. This relative peace is shattered when the dreaded ‘Money Clan’ set their sights on ruling the martial world and see Li as a potential obstacle. To alleviate themselves of this impediment, the clan decide to call on the services of a fearsome swordsman (Fu Sheng) who is also eager to cement his reputation throughout the country. While Li battles his inner demons and his new enemies, Fei is turned every which way but loose by a ruthless seductress who is secretly at the servitude of the ‘Money Clan’.

Though Chor Yuen manages to create a worthy sequel to his beloved ‘The Sentimental Swordsman’ – surely his main goal – he also succeeds in constructing a vicious critique of the oft-romanticised martial world, showing it for all the shallow pomp and shattered lives it would have left behind. This latter facet elevates a solid swordplay film into a much more intriguing proposition, helping to wipe away any of the inevitable signs of aging that have accrued since its conception. Such an achievement is not to be underestimated.

Initially, ‘Return Of The Sentimental Swordsman’ seems to be going through the motions. The scenarios penned by Gu Long and brought to the screen by Chor Yuen have a ring of familiarity about them that seasoned viewers will immediately identify: the hero is challenged, succeeds, moves on, is then challenged again etc. These plot-devices are part-and-parcel of this particular sub-genre and are in danger of becoming stale before the film progresses much further. Sure enough, ‘Return Of The Sentimental Swordsman’ drags itself through the first twenty minutes, throwing our hero into rather uninspired situations. It is then, though, that Chor Yuen begins to dig beneath the text and open up the underbelly of the martial world.

Chief hero Li is the perfect example of the story’s message. A hero whose reputation ensures that a steady stream of challengers, Li is a character who is left to rue the desire of his formative years – the need to be the best in the martial world. Chor Yuen shows how Li’s life is now just a empty ritual of surviving to the next fight and seeing everything he holds dear torn away from him; indeed our depressed, reluctant hero reiterates the point near the films close, telling a rival how his life is no longer his own. With such a strong emphasis on this hitherto underdeveloped tension, Yuan avoids the constant mythlogising of the martial world which, while viewers are mostly happy to observe, needs this probing examination once in a while. Ti Lung once again excels in the lead role, making the deep emotional scars that his characters carries with him appear all too apparent on his haggard face. While characters like Chu Liu Hsiang from ‘Legend Of The Bat’ gave Lung a chance to show his lighter, more arrogant side, ‘Return Of The Sentimental Swordsman’ is a welcoming stretch of his considerable acting abilities. Derek Yee also revels the chance to play a tortured hero as does Fu Sheng who moves away from his cheery disposition to take on the part of the lumbering, yet none too sharp villain who is manipulated by just about everyone.

‘Return Of The Sentimental Swordsman’ is packed with the usual swordplay confrontations that, while competently choreographed, remain watchable, but hardly special. However, this is a production that is a minor achievement despite its action rather than because of it. The sharply written screenplay gives non-action scenes the impetus that other such films often lacked while Chor Yuen’s keen eye for extravagant set design adds the veneer of sophistication that the director is appreciated for. There’s therefore much to recommend this superior sequel, a film that takes the best elements of the original and invites viewers to contemplate a message beyond the common expectations of the genre.